The Samsung Galaxy S7 and S7 Edge are undoubtedly the best Android smartphones of the year, at least until now. Earlier reports showed that Samsung managed to sell nearly 10 million units in the first month and exceed sales expectations. This is surprising because the S7 Edge has a very similar design as its predecessor. So, why are people more interested in the new phone? Keep reading for my insightful review after using the S7 Edge continuously in the last 3 months. My review unit is the S7 Edge Silver Titanium SM-G935F.

The S7 Edge looks as stunning as the S6 Edge and you can see that there is no radical difference in the design here. If Samsung didn’t increase the screen size, it would be very difficult to distinguish between the two. The S7 Edge is noticeably larger in all dimensions and also heavier, mostly because it is equipped with a bigger 5.5-inch screen and a larger battery.

However, the bigger screen is obviously not the selling point here. Two of the most important reasons people love this phone are the comeback of microSD card slot and IP68 rating for dust and water resistance. The phone is not waterproof but it can withstand more than 1m of water for 30 minutes. I’ve seen many users record underwater footage with this phone. On the other hand, the phone’s internal storage is just 32GB but it is expandable up to 200 GB via microSD card. The microSD card slot is on the same tray with the SIM card, which is put on top of the phone. Those are not new features as we’ve already seen them on the Samsung Galaxy S5, however, the implementation on a premium metal and glass unibody construction with curved display makes the phone even more compelling. 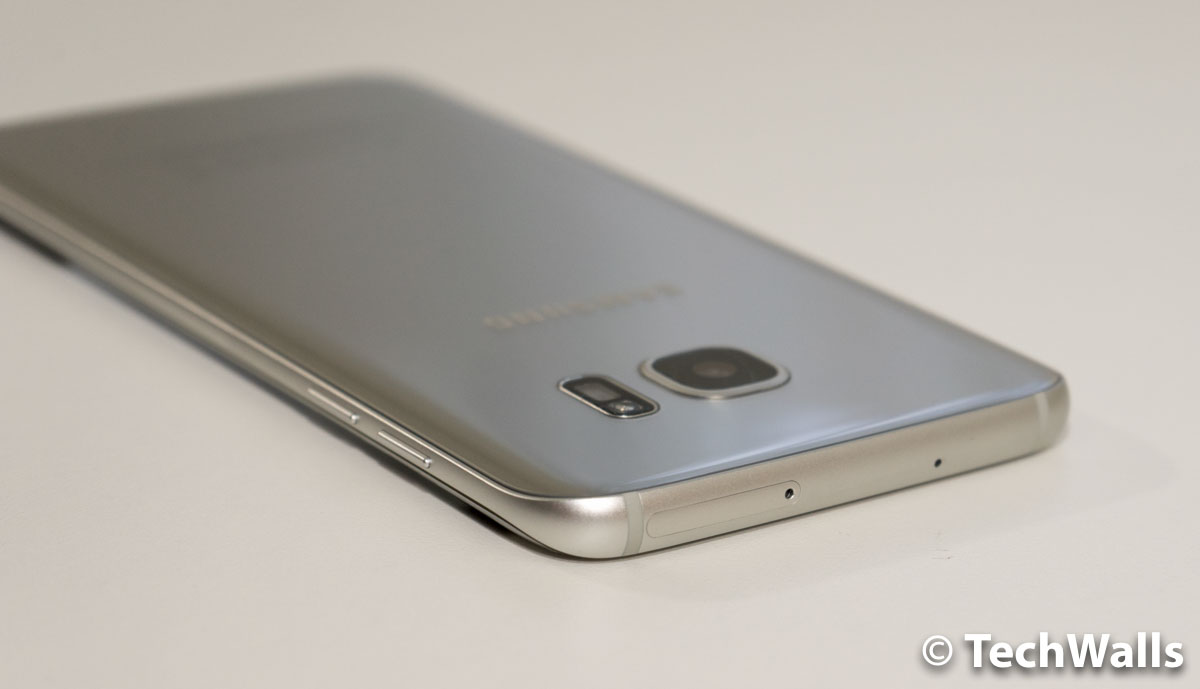 There are also some refined design elements to improve the comfort when holding the device. The edges are not as sharp as the previous version, so you will feel quite comfortable when using your phone for a long period of time. Besides, the rear camera is less protruding because the phone is a little thicker now. Those subtle changes really make the phone more complete. The only downside is that my palm can accidentally touch edge of the screen, especially when I need to reach the further end. Therefore, the one-handed usability is not as great as on normal phones with flat displays. 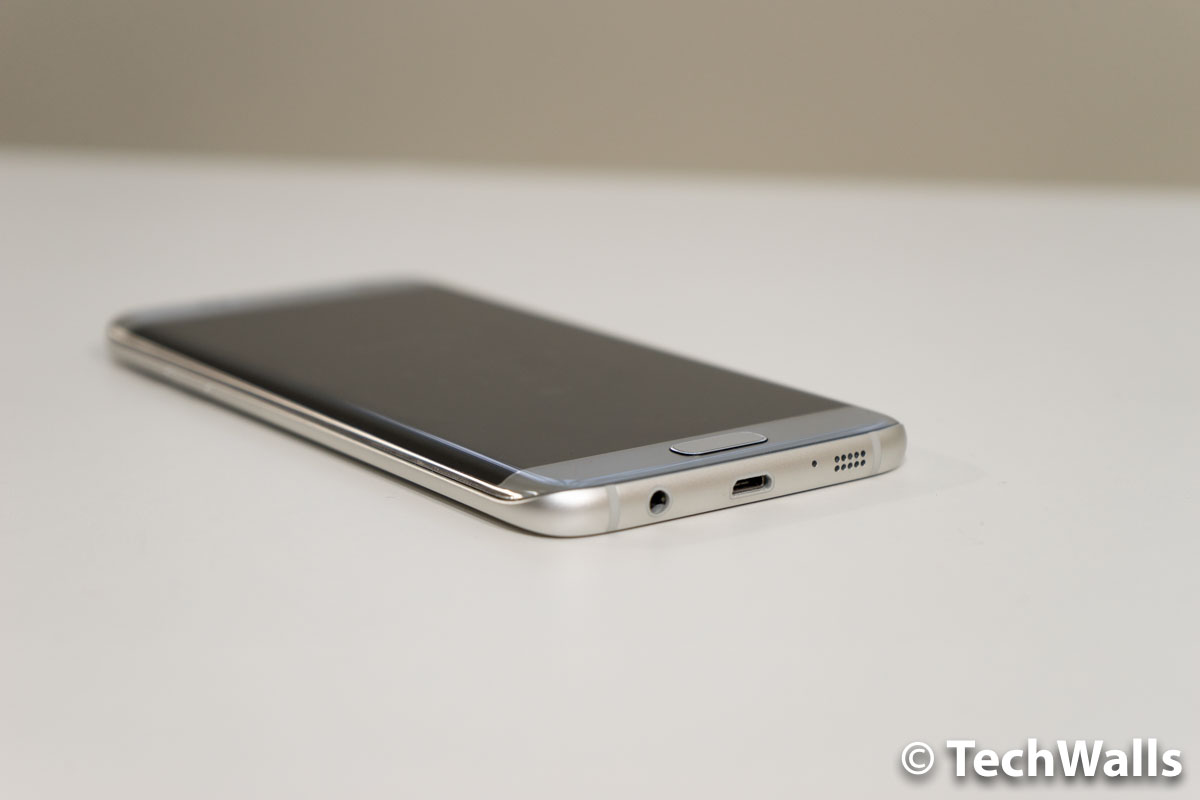 Samsung uses the same Super AMOLED display with a Quad HD resolution on the S7 Edge, however, the pixel density is a little lower than the S6 Edge. That is because Samsung bumped up the screen size, however, you will hardly see the difference between the two screen. The image quality is still beautiful with high contrast ratio, deep black, vibrant colors and wide viewing angle. If you don’t like the color profile, you can switch among 4 modes, which are Adaptive display, AMOLED cinema, AMOLED photo and Basic.

You can see that the display is still crisp and clear under bright sunlight. This is probably the best display on a smartphone, so there’s nothing to complain about. If you want a 4K display, you might have to wait until the next generation but it’s totally redundant in my opinion. You only need the 4K resolution for the Gear VR. 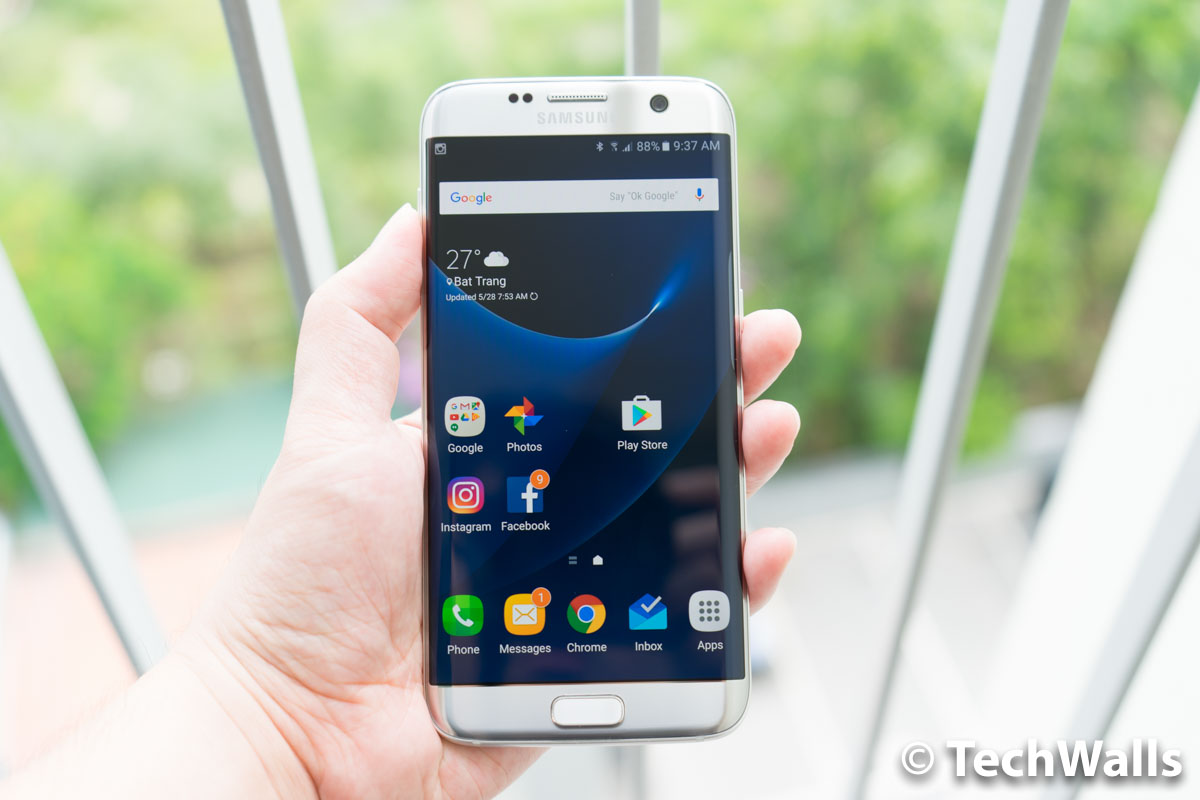 The device runs Touchwiz UI on top of Android 6.0 Marshmallow. There is no difference between the S7 Edge and S6 Edge, especially after the S6 Edge has been updated to Marshmallow. It still comes with tons of pre-installed apps from Samsung, Microsoft, and Google. You can’t uninstall them but you can disable those apps and they will disappear from the app drawer.

If you prefer the S7 Edge over the S7 just because of the Edge screen, you should think again because this is more of a gimmick. I hardly use the feature in real life, I only access it occasionally to use quick tools like ruler, compass or flashlight. 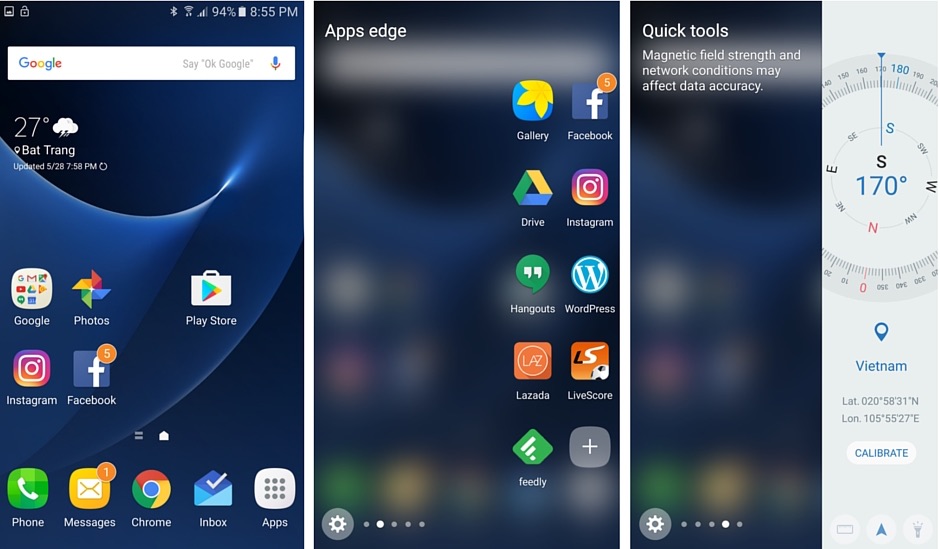 There is another new feature that I highly appreciate, that is the always-on display. This is extremely useful because I no longer have to unlock the phone to see date, time, battery percentage, any missed call or unread message. The information is always displayed on the screen even when the phone is in sleep mode. You can also change the settings to show a calendar or an image instead. The feature will drain your battery a little quicker but it is not significant, just about 10% a day.

The fingerprint scanner is fast but not as great as the one on iPhone 6S Plus. I have to press and hold the home button longer to wake up and unlock the phone.

The S7 Edge comes in some different model numbers released for different markets. The model number of my phone is SM-G935F, that means it is powered by the Exynos 8890. This is not necessarily a bad thing because the chipset performs better in multi-core tests. The Antutu benchmark shows a very high score of 127,899. This is a super-fast phone and it can run all games on Play Store smoothly.

I tested the signal reception of the S7 Edge thoroughly and I’m quite satisfied with the result. The cellular reception is very strong, I’ve never had a dropped call, the 3G and 4G speeds are very fast.

Besides, the Bluetooth, NFC, and Wi-fi connections are excellent.

The camera quick launch shortcut is still there and this is one of the reasons I love this phone. I’ve never missed a moment because I can quickly open the camera app with a double tap on the Home button. Samsung dropped the megapixel number of the rear camera from 16MP to 12MP but that doesn’t mean this is a downgrade. They actually increase the aperture of the lens to f/1.7, pixel size to 1.4 µm and uses dual-pixel technology. That explains why the new camera can focus significantly faster and it performs much better in low-light environments. 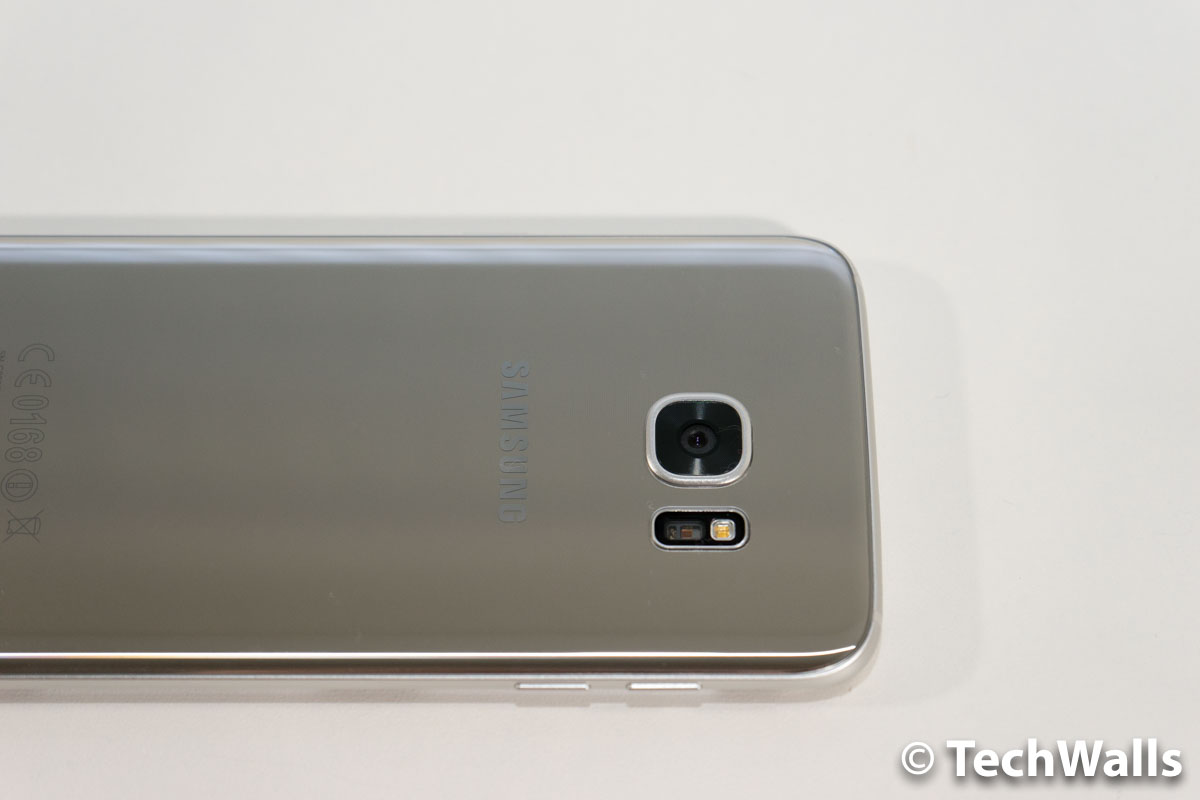 Take a look at some sample images below:

Here are the 4K footage recorded with the camera, the optical image stabilization (OIS) performs extremely well and all of my videos don’t look shaky at all.

You can also check out hyperlapse and 240fps slow-mo videos here.

The battery life is not as impressive as I expected although the S7 Edge is equipped with a big 3,600-mAh battery, which is 1,000 mAh more than its predecessor. It can last a full day of moderate usage, so you still need to charge it at the end of the day or the battery will die in the next morning. 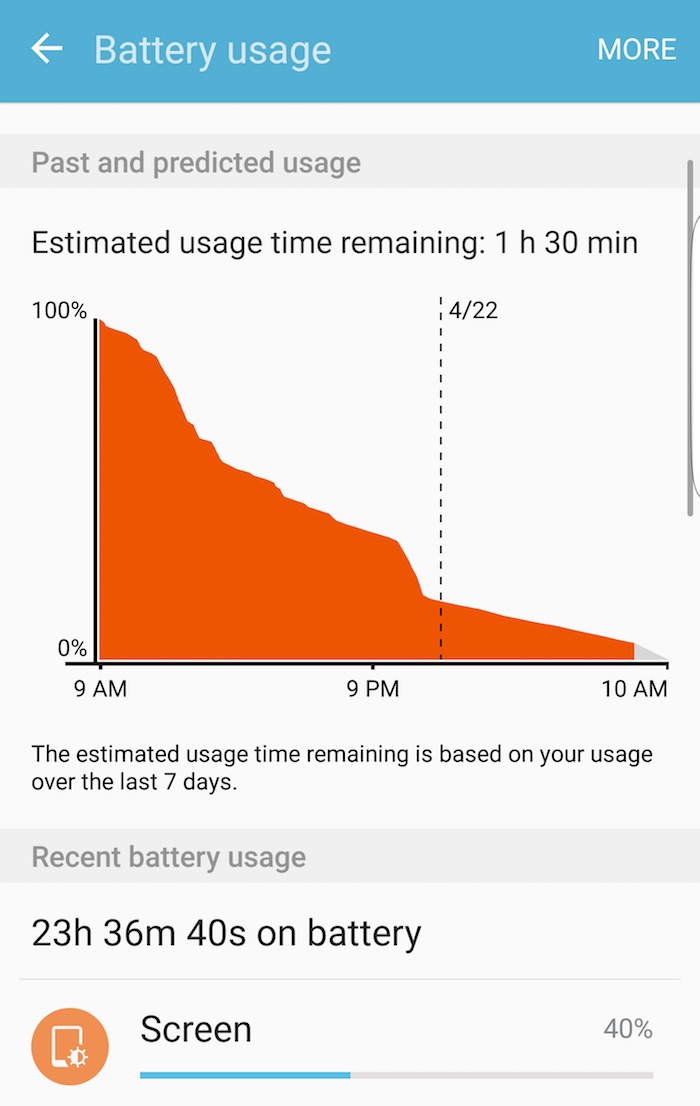 The phone supports wireless charging and Quick Charge 2.0 and I found them very useful. I can charge the battery to 50% in half an hour and fully charge it in about 1 hour 30 minutes. It’s just a little disappointing that it doesn’t support the new Quick Charge 3.0.

Overall, the Samsung Galaxy S7 Edge is the best Android smartphone your money can buy. I can’t recommend the phone enough. If your budget is a little lower, the Galaxy S7 is not a bad choice in the high-end market.