After the silent death of Google Nexus 9, Google Pixel C has become the only tablet being listed on Google Store. Buying the Pixel C is also the best way to get pure Android in tablet form at the moment, however, it has to face many challenges as the tablet market has become so saturated in the last few years.

Now people tend to use their smartphones more as the phones like iPhone 6S Plus or Samsung Galaxy S7 Edge are equipped with big screens and they are much more portable. So, what’s the advantages of the Google Pixel C and who should buy the tablet?

As compared to the Nexus 9, the Pixel C has a much more impressive design. This time, Google doesn’t rely on any 3rd-party manufacturer. The Pixel C is entirely designed by Google and manufactured somewhere in China.

The tablet no longer uses a plastic chassis, instead, it features an all-aluminum body that feels so sturdy and premium. The metal frame makes the Pixel C a little heavier than other Android tablets, as well as the 9.4-inch iPad Pro. I really love the minimalist design of the tablet. There are just a power button and quad noise-cancelling microphones on top, volume rocker and USB Type-C port on the left side and side-facing stereo speakers. The back panel is also very clean with just a rear camera and a light strip. The light strip is actually a battery indicator, you can knock on the back twice to see the battery level. 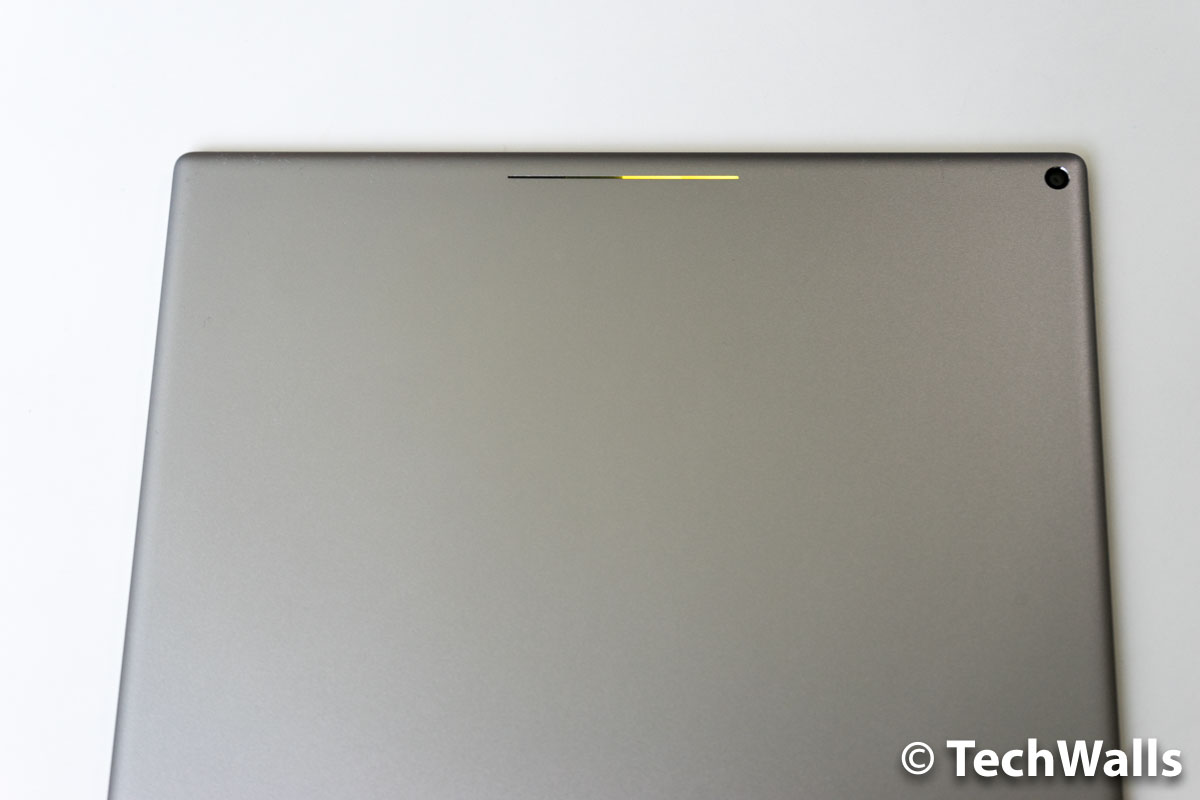 Unfortunately, it is not perfect as there seems to be a manufacturing issue with this device. When I pick up the tablet or push it a little hard on the left side of the screen, it creates a clicking sound like you are pressing a button. The issue is more common than I thought, I contacted Google and they said that this is a normal behaviour and my unit is not defective. This is quite disappointing because I have never had this issue with other tablets. 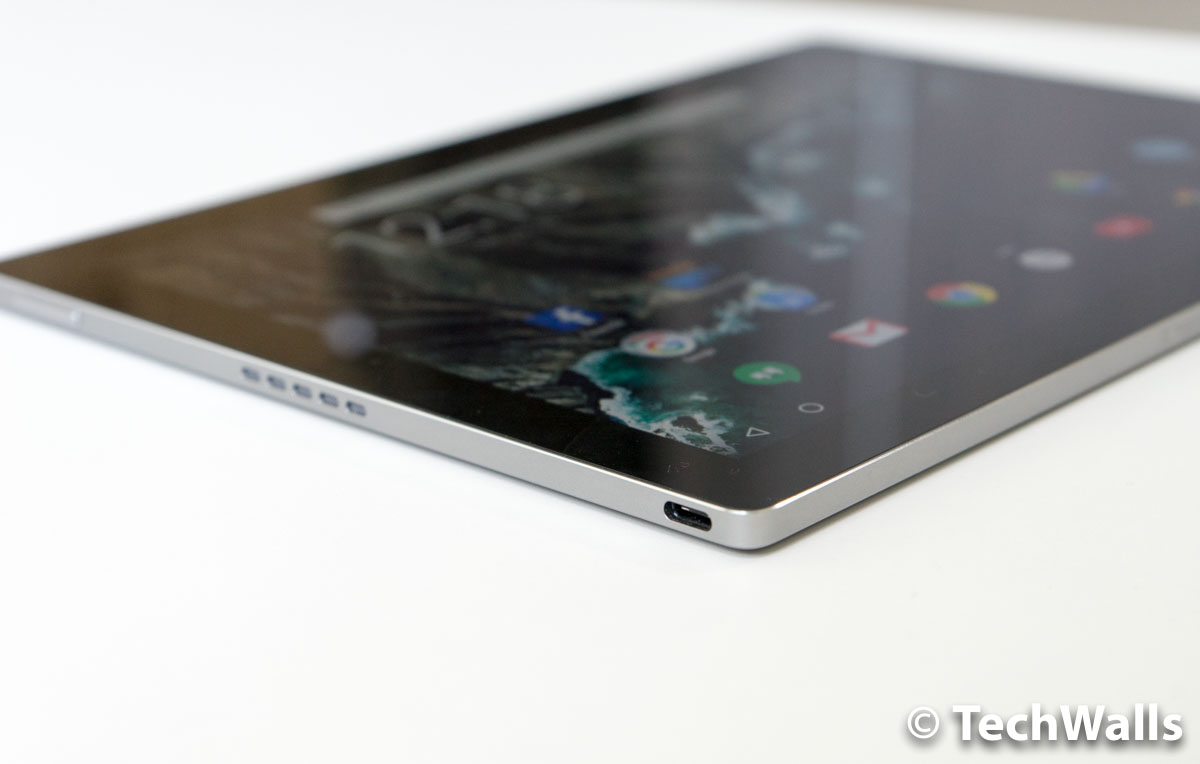 The Google Pixel C features a dual side-facing speakers, that means Google wants us to use the tablet in landscape mode to have the best audio quality. However, the sound from these speakers is still not something enjoyable. It is loud enough and I can hear dialogues clearly but it is muffled and lacks warmth. 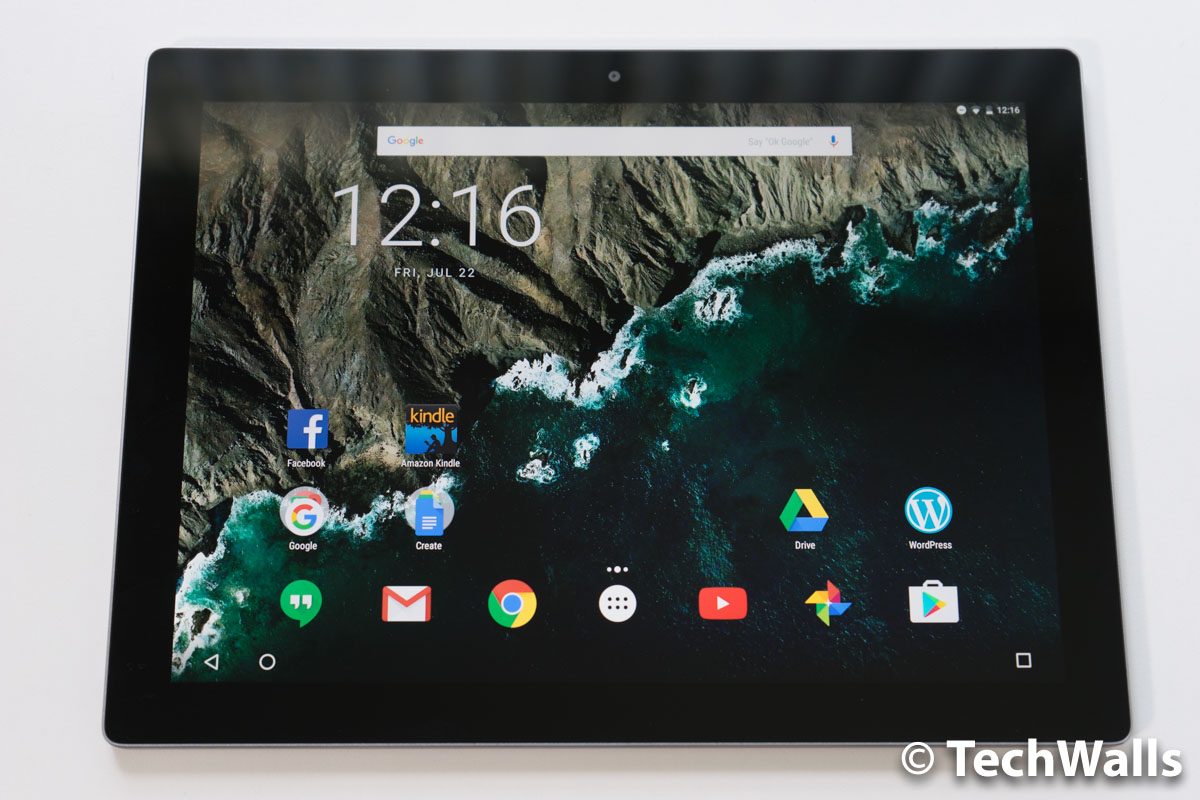 On the other hand, the Pixel C is equipped with a brilliant display. The 10.2-inch screen has a higher pixel density than its competitions like the Surface Pro 4 or iPad Pro, specifically, the pixel density is 308 ppi while that of the iPad Pro is just 264 ppi. The LCD screen deliver a crisp and clear image for reading, playing games as well as watching videos. The viewing angle is impressive, contrast is good very good and the screen is also bright enough to see clearly under natural sunlight.

I got the Pixel C mostly because it is running a stock version of the Android software. At the moment of writing this review, the latest stable Android release is 6.0.1 Marshmallow. This version is widely available on many other devices as well, so there is nothing special here. However, I’ve experienced some problems with the Android version on my Pixel C.

Firstly, I am totally disappointed as there is no split-screen multitasking support yet on this productivity tablet. Fortunately, this will change soon when Android 7.0 Nougat. Once the update reaches my device, I will be able to hold the task switcher button to enable the split-screen view, this is somewhat similar to the Multi-Window mode on Samsung’s tablets.

Another missing feature is the always-on OK Google support, Google said that it would appear in a future update, so we will have to keep waiting.

The most serious issue comes from the audio jack. This is the scenario. I plug in the headphones to this tablet, watch a movie, then put it to sleep and remove the headphones. The next time I wake up the Pixel C, I will totally lose the audio from its built-in speakers. The only way to fix it is plugging in the headphones and removing them once again.

Apart from those problems, this is by far the best Android experience ever. The Pixel C is powered by the Nvidia Tegra XI 64-bit processor and 3GB of RAM. It manages to run all latest games and apps smoothly without any lag or hiccup. Benchmarks show that the performance is very close to that of the more expensive iPad Pro.

If you plan to buy the Pixel C, you might also be interested in its companion keyboard. This full-size keyboard can be easily attached to the tablet by magnets, you can adjust to any angle, and you never have to worry about charging it. I didn’t buy the $149 keyboard because it’s too expensive and I prefer using my QwerkyWriter mechanical keyboard when working at home.

This is probably the most amazing aspect of the Pixel C. It features a massive 9,000mAh battery, so the tablet is unbeatable when it comes to battery life. It is boosted further thanks to the Doze mode of Android Marshmallow.

In my test, the battery could last nearly a week for my average use and a couple of weeks in standby mode. Even when you are a heavy user, I believe you won’t have to charge the tablet every day. 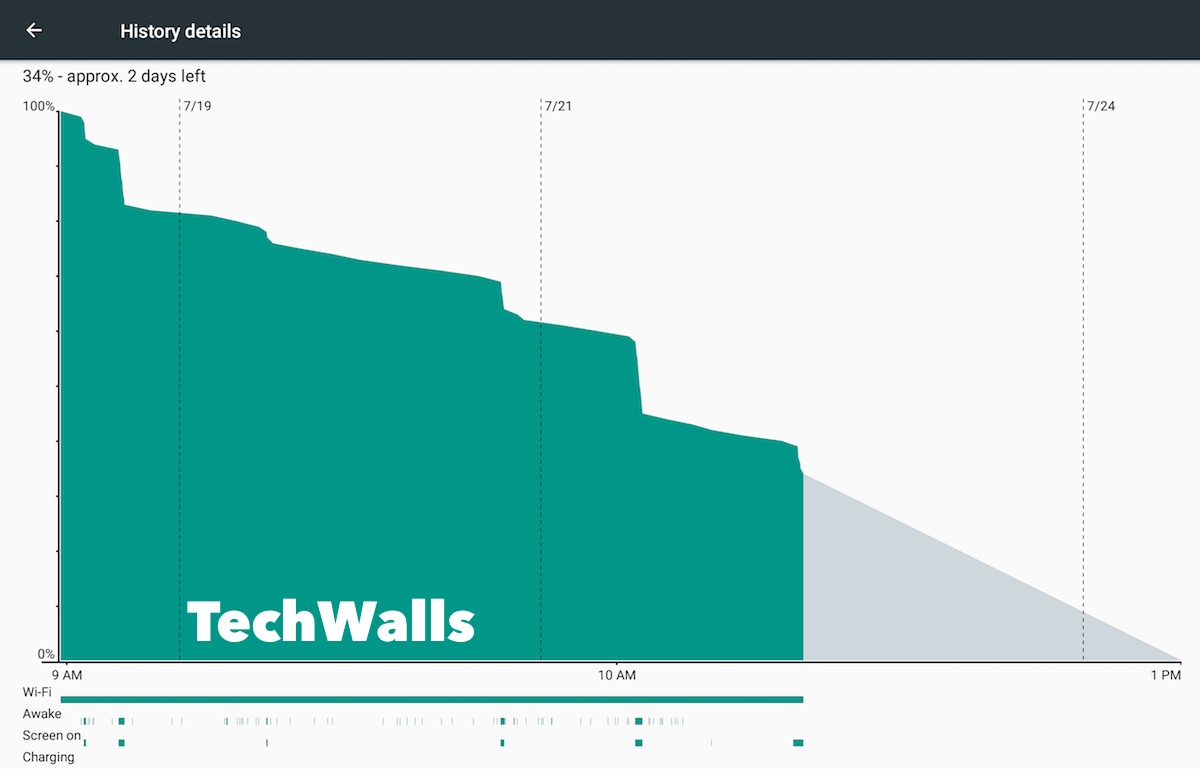 In a nutshell, Google Pixel C is the most powerful Android tablet on the market and also the only option if you want to experience the pure Android experience. This is built for any Android fan or developer who wants to be the first ones trying new features of Android releases. You might want to hold up a little bit if you want to replace your laptop with the Pixel C, the tablet is not capable enough and too expensive at the moment.