Your wait for the best QWERTY-slider Android smartphone might just be over with Motorola’s latest installment to its DROID series smartphones, the Motorola DROID 4, which in its first look seems to have dealt away the major issues the mobile manufacturing giant has been facing, post the initial success found by the original Motorola DROID.

The new Motorola DROID 4 is now available on amazon for $99.99 with a 2 year Verizon Wireless contract. Motorola has made some pretty impressive changes in the hardware along with the introduction of 4G LTE connectivity to DROID series, although new concerns related to poor screen and camera-picture quality have surfaced already.

The DROID 4 is a 4.98 by 2.7 by 0.5 inch smartphone with a 4 inch 960 x 560 pixel resolution qHD display screen. This PenTile TFT LCD display fails to create a sharp appearance, although the high pixel density helps resolve this issue. The 8 mega pixel auto focus camera poses multiple leveling issues but produces decent images when used outdoors. Even with the 1080 pixel HD video recording option on, the issues still persist. Surprisingly, the 1.3 mega pixel camera on the front works well in sync with Skype and other similar apps. 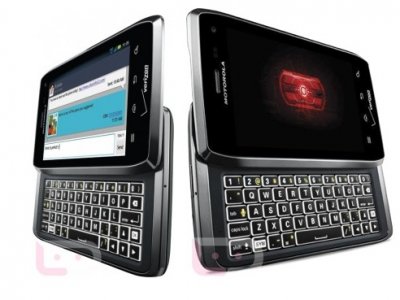 The DROID series smartphones have been much acclaimed in the past for its keyboard, and with the new Moto DROID 4, the QWERTY smartphone experience gets to its best! The charming keyboard works with ease and the LED backlights provide a pretty classic look. The buttons are well spaced out and typing is smooth and easy. Importantly, the 1.2 GHz dual core TI OMAP 4430 processor does a good job throughout every functioning, even with high graphic oriented games. Supporting 16 GB of internal memory, the 4G LTE Verizon connectivity tests were swift and consistent too. Motorola DROID 4 runs the latest version of Android Gingerbread with custom Motorola overlay. Several pre-loaded apps, softwares and games like MotoCast, Smart Actions, Stock Web Browser, Slacker, Blockbuster etc. find a place on the device and cannot be deleted, but hidden if you intend wipe it off your screen.

Volume rocker on the right and the power button on top are slow to respond. You’ll find the micro USB and micro HDMI ports on the left and the 3.5mm audio jack on top of the device. An interesting tweak is the 1785 non-removable mAh battery, which clocks a talk time close to 8 to 10 hours. Once the back cover is off, you just get to view the micro SIM and micro SD slots.

Motorola DROID 4 is the best of the series with appealing new features and an attractive Verizon package, though its run against Motorola DROID Razr Maxx might turn out to be a concern for Motorola in the days to come.