The self-built tablets by Microsoft were introduced to the public a few days ago. There are 2 editions of Microsoft Surface announced, the Surface RT and the Surface Pro.

Although there are still months to the release date of the Microsoft tablets, they have already been creating the buzz and promised to end the domination of iPad and Android tablets. I am myself really impressed with what Microsoft is offering this time and believe the devices could suit needs of most consumers. If you are still using a netbook/laptop and hesitating to get a tablet, this is the time and I totally recommend you to purchase a Microsoft tablet because this is an efficient and compact device. You can get the comfort and portability of a tablet, and still don’t lose the high performance of a laptop. Your choice will just become more narrow to the choice between Surface RT or Surface 8 Pro.

If you attended or watched the event online, you probably don’t understand clearly the differences between the 2 models as they look quite the same. Fortunately, Microsoft announced details on features and tech specs of the 2 tablets. The Surface RT is the lower-end edition compared to the Surface 8 Pro but it will be released 3 months sooner and have a lower price. Although RT is the lower-specced one, it is absolutely not weak at all compared to current tablets on the market. Besides, it has quite similar design with the full USB 2.0 port, optical bonding display, built-in kick stand and cover, and solid build. The RT edition is even thinner and lighter. 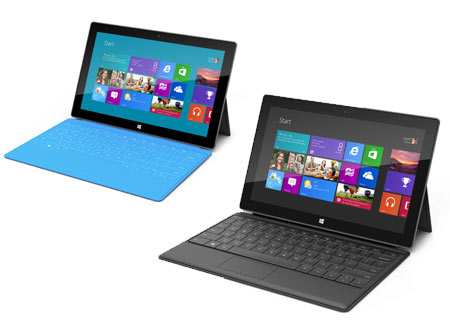 Let’s take a look at the detailed comparison between Microsoft Surface RT and Surface Pro.

What do you think about the 2 new Microsoft Surface tablets? Could it become an iPad and Android killer with the higher price tag?