To no surprise, the iPhone 5 was announced today. Despite being a bit different from the name I expected, the New iPhone, there weren’t many other surprises from there. However, seeing the final product and the other products released today, we were ultimately satisfied with the conference in the end, which ended with Tim Cook following a Foo Fighters performance. Let’s take a bit of a focus on the star of the show – the iPhone 5 – later on in other articles we will focus on the other pieces of the conference today.

When covering the event today, one thing that I noticed was that this was mainly a hardware event for Apple. They don’t have a ton of software improvements due in part to how iOS 6 covers that group. There was no Siri-level announcement here today, though Siri did receive some updates in iOS 6. In terms of hardware updates, the colors didn’t change, but the device’s materials did.

The iPhone 5 now is made out of a mainly aluminum backing with an all glass screen. The iPhone 5’s hardware is also much thinner than the iPhone 4S. The iPhone 5 was 7.6mm thin and a 4-inch Retina display. To accommodate the larger screen, apps add a black border, unless their developer formats the app for the iPhone 5.

In terms of other hardware updates, the iPod Nano now has a touchscreen, home screen, and a larger screen. The iPod Touch now comes in five colors (Black, White, Blue, Yellow, and Red).

The iPhone 5 now comes with LTE, available on AT&T, Verizon, and Sprint. The antenna also allows for switching seamlessly between different networks. More networks are being supported now, all new international carriers. No new US networks as of now. The current claim is that the iPhone 5 can go up to 1000 mbps in speed on LTE.

The iPhone 5 is faster than ever with the A6 chip, this replaces the A5 chip in the iPhone 4S and currently in the iPod Touch. This makes the device twice as fast compared to the other chip. The thinner form factor of the iPhone 5 can also be attributed to two updates in the iPhone 5, including touch sensors being applied directly on the screen rather than elsewhere. Also, the A6 chip isn’t only faster, but also thinner. The battery life is 8 hours, even on LTE, with 225 hours on standby.

Other inner updates include better call audio quality. The three microphones (one on the front, one on the back, and another on the bottom), audio quality in video is much better. Which leads us to camera quality! 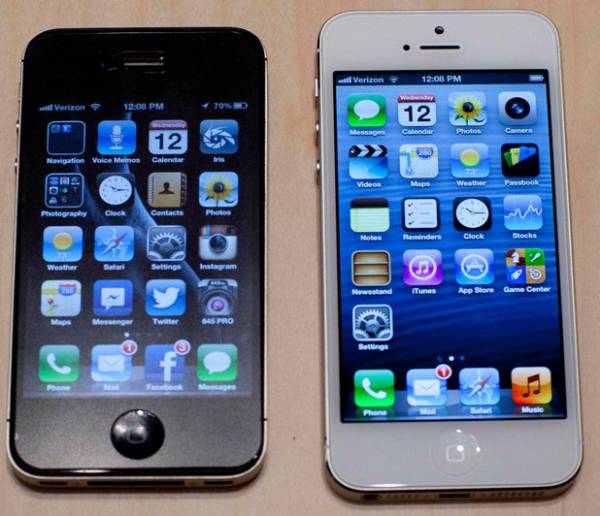 If you look on paper, there may not seem to be many updates in terms of quality. We have stuck with the 8 megapixel camera quality of the iPhone 4S. The iPod Touch has a 5-megapixel camera quality. The frontal camera of the iPhone 5 has 720 p video quality, the rear has 1080p video. The camera also includes panorama mode and better low-light quality.

More on Lightning and Earpod

Lastly, let’s take a bit of a look at Lightning. This is Apple’s new standard in connector cords. Lightning is 80% smaller than the previous standard connector on the previous iPhones. The charging adapter will set you back $29. In addition to the nixing of the 30-pin connector, Apple has updated their standard headphones that always seemed to either break or slip out of our ears.

After years of research in consumer ear sizes, Apple has found a form factor that Apple claims will fit our ears better, preventing or at least minimizing slippage. The Earpod, the only product of the conference today that is available at launch, will also set you back $29. However, they are becoming standard, which means they will be shipped with all iOS devices; however, I’m still waiting to hear if that will still hold for iPhone 4 and 4S purchases.

Other products of the announcement today was a minor update with the Shuffle, now including a Voiceover feature, allowing you to hear the battery life, album info, and more. It uses the voice of Siri, so that should give you an idea of it being more of a notification feature. The Shuffle will sell for $49.

iTunes offered a major update in the interface, creating a more seamless design that is more integrated with iCloud. When minimized, a mini player is shown that allows you to see what is going to be played next and to choose a different song if you wish. Other iCloud updates include the ability to watch a movie on one iOS or OS X device and finish it on another. Artist pages now include tour and concert updates, along with artist uploaded photos.