The iPad3 is expected to be an amazing device that will be released next year and predicted to rock the tablet world. An anonymous employee for Apple had previously stated that we should ‘make a song and a dance’ about the iPad 3. The iPad 3 has become the most anticipated gadget that is about to enter the market.

Update: The new iPad has been announced but it is not called the iPad 3, Apple calls it the new iPad. The new tablet will come with a new, faster A5X processor which is 4 times faster than the previous iPad. This is actually the modified A5 chip from the iPad 2 and iPhone 4S, Apple paired the CPU with an improved quad-core graphics processor to the chip. Check out the detailed comparison between the new iPad and iPad 2 tech specs.

Many people expected that Apple would add Siri, the digital personal assistant, but they didn’t. However, they added voice dictation feature for the new iPad, we can use this feature to write messages, take notes or search the web.

The new iPad features a 2048 x 1536 pixel resolution display, it qualifies as a retina display as it has a dpi of 326. Besides, the improved camera first introduced on the iPhone 4S has been added to the iPad. The 5MP camera has built-in image stabilization and can shoot video in full 1080p HD resolution. The front 0.3-megapixel camera is used for FaceTime video chats and some lower resolution photos.

Another notable feature is the new iPad will get faster 4G available from AT&T and Verizon. Apple also introduced new updates to the iMovie and GarageBand for the iPad. 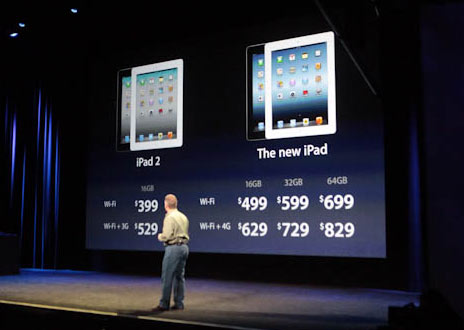 The new iPad doesn’t really meet our expectations. Check out the iPad 3’s features that was expected from the iPad 2:

The iPad 2 became a top contender in the tablet war because of its specs featuring 900MHz dual-core ARM Cortes-A9 processor, Apple A5 chipset & PowerVr SGX543MP2 GPU.

The iPad 3 is about to introduce itself to an astonishing number of consumers and rumor has it that it will be sporting a ‘Quad-Core Processor,’ probably the A6. That processor would make the ipad 3 just as powerful as the high-end pc’s available.

When iPad 3’s OS is outlined, we could see a major change. iPad 2 is powered by an iOS 4; it is rumored that the iPad 3 will move into the next-generation, the iOS 5. The rumors for iPad 3’s OS become even more interesting. It has also been said that the tablet will run OS X. Therefore, if the previously mentioned quad-core processor is actually launching, the chances are high that Apple will also launch OS X Lion for the iPad 3.

Apple previously launched HDMI playback in iPad 2. However, this was not without complications. It was necessary for the user to purchase an additional digital AV adapter for $39. The much-awaited iPad 3 is supposed to eliminate the necessity for the added HDMI cable with its HDMI port.

The iPad 2 was supposed to have the advanced retina display, however, Apple decided to utilize the first iPad’s display instead. Rumors indicate that the iPad 3 will have the improved retina display (2058 X 1536 pixels is also expected).

Other features that have been rumored on the iPad 3 are a Thunderbolt port, which is to assist in data flow and lightning fast connectivity, wireless synchronization allowing the user to eliminate the traditional wired connections. The iPad 3 is expected to have the SD card slot that is missing from the iPad 2. If the rumors are true, then Apple is going to introduce 3D into its next tablet as well.