Evernote has been available since the summer of 2008, however just this year I have found myself becoming more active with Evernote. The application previously just sat on my dock, without being activated. As I try to implement my New Year’s resolution of becoming more productive, Evernote has been a great way for me to transition. As of yet, I haven’t found myself using Evernote extensively yet, I have found a couple of life hacks to implement Evernote into. For example, I have scanned restaurant menus, allowing me to simply search for something I’m craving and find it in a menu. However, one way I have used Evernote everyday was with blogging. How so? I will cover how below.

All of my articles start with an idea. The idea can come from something as simple as what the editor wants to focus on for the month, to something I may experience or find inspiration from the day. One example was when I was taking a walk on the trail the summer near the Golden Gate Bridge, I was instantly inspired to write an article on a particular subject. When the inspiration came, I just added it to my list on Evernote and continued on with my walk. I don’t have my organization at this point, that will come a bit later in the process.

From the Calendar to Evernote

Once I do in fact have all of the subjects I will be writing about, if I haven’t already, I will begin creating titles for the articles I will write about. By this point, once I have titles together, I will begin organizing them into an actionable plan for the month. I begin by looking at a calendar and organizing articles based on how appropriate they would fit during the month. 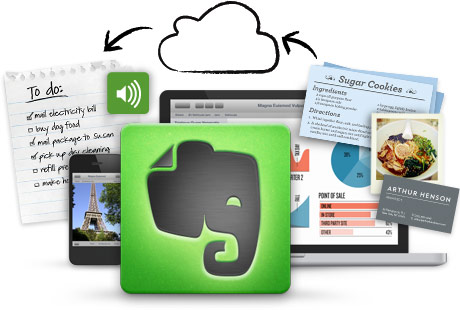 For example, during this busy holiday season, I usually would transition from writing about holiday subjects (gift giving holidays) to New Years subjects right around the end of the second week of December. I do this simply by adding a date next to the title. For example, for this article, I put: “How I Use Evernote When Writing – December 16th – Tech Walls”. When I’m done with the article, I simply cross it out by highlighting it, clicking Control+T, then clicking the cross out feature.

Many of the articles I write about are original, like this one for example. However, there are many times when I have to write review articles or assess rumors that seem to be omnipresent. When articles like these spring up, I must ensure that I have the sources well organized and readily available at any time. Evernote’s Web Clipper feature makes this so seamless to do. When I ever have to refer back to it for a quote, the ability for Evernote to save the web page in a highly editable format makes it easy to copy text, as opposed to Evernote making it into a screenshot for example.

From the Notebook to Evernote

When you are writing articles on a computer, with the subject on technology, while having the television in the background or music from iTunes on, it can get a bit overwhelming. For me, I find it quite necessary to get back to the basics sometimes to create quality pieces. This is sometimes done by writing them out on good ol’ notebook paper and pencil sometimes. Evernote has specialty paper that makes it easy to take a photo your notes from the Evernote iPhone app and seamlessly have it added to Evernote. Tagging is made easy and digitally with the Smart Stickers. These notebooks, in conjunction with Moleskine is the perfect bridge between modern technology and getting back to the basics.

The Items I Use: