The Samsung Galaxy Alpha was the center of a raft of rumors in recent weeks. Although its flagship level specs were something to awe over, it perhaps attracted most attention relating to its design. The Galaxy Alpha is Samsung’s answers to users asking for a more ‘premium’ Galaxy smartphone. That’s right folks, the Galaxy Alpha boasts a metal frame. So without further ado, let’s dig in and find out what this bad boy packs.

Focusing on the design aspects of the device first, it still very much looks like a Samsung device. Even though it features a strikingly similar bevel-edged frame Apple used on the iPhone 5S, it’s very much a Samsung device with a perforated backplate, akin to that of the Galaxy S5 and the oval home button and capacitive touch buttons adjacent to it. The device does indeed look better, and must have that premium metal feeling to it. For a device of its stature, the Galaxy Alpha is surprisingly thin. It stands at less than 7mm thick – making it one of the slimmest Galaxy devices ever. 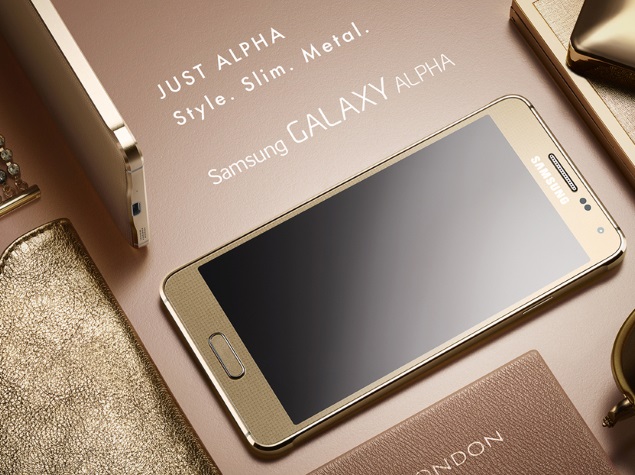 Moving onto the more juicy part, the Galaxy Alpha has plenty of firepower under its hood. The new handset sports a familiar 4.7-inch Super AMOLED HD display at 1280×720, and 320ppi pixel density. The device boasts Samsung’s Exynos 5 octa-core SoC @1.8GHz, 2GB of Ram and 32GB of internal storage, which is not user-expendable. There is a 12MP camera on its rear, while the front facing camera is 2.1MP unit. Additional specs include Wi-Fi, Bluetooth 4.0 and NFC.

Powering all that will be, by Android flagship standards, a measly 1850 mAh battery. But Samsung has included some battery saving perks with the device. The Ultra Power Saving Mode is a handy perk that limits the screen to black and white and greatly reduces background processes.

The Galaxy Alpha will run Android 4.4.4 KitKat out of the box with Samsung proprietary Magazine UX homescreen and Galaxy apps. Other features include a fingerprint scanner embedded in the home-button much like the Galaxy S5, file-hiding Private mode, Samsung’s S-Health and integration with wearables.

The Galaxy Alpha will be available by early September in a variety colors, including charcoal black, frosted gold, dazzling white, sleek silver and scuba blue. Samsung hasn’t announced market and pricing yet.