All of these tablets will have the same resolution of 1280 x 800 and will be running Android Kitkat 4.4 out of the box. These tablets will feature the new Touch Wiz user interface from Samsung that was introduced in Galaxy S5. 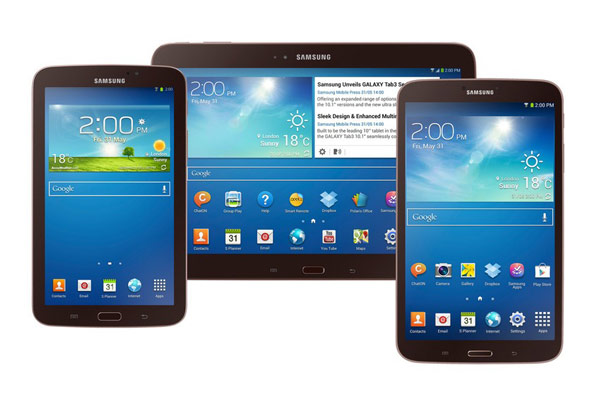 They will come in both LTE and Wi-Fi only versions but LTE models will be able to support up to 64 GB SD card storage while the Wi-Fi versions can only support up to 32 GB. They will have a 3 MP shooter at the back and a 1.2 MP camera on the front. In terms of battery power, only the Galaxy Tab 10.1 will have a 6800mAh battery while both the Galaxy Tab 7.0 and the 8.0 will include a smaller 4450mAh battery.

Galaxy Tablets 4 will come in both white and black colors though there is no actual news on when these tablets will be hitting the markets. It’s quite disappointing to see that all the tablets have same kind of specs. Obviously a 720p resolution on a 10.1 inch device will look pixelated. Let’s hope that Samsung introduces some higher end models as well in their latest Galaxy Tab 4 series.