After much anticipation and rumors, the Samsung Galaxy S3 is finally here with a bang!! It features a quad core CPU which provides mind boggling processing speed. It’s creating a buzz among techies because amazing features such as its super fast processor, terrific display, eye tracking control sensor and amazing battery backup. It seems like Samsung Galaxy S3 has the power to rule the Smartphone world.

Shape of the phone is pretty much similar to other phones of Galaxy series, with few modifications here and there. According to Samsung, the design of Galaxy S3 is inspired by nature and has no straight lines. Despite of being subtly broad at the waistline, the phone is easy to hold and operate. The design is smooth and appealing at the first glance except for the plastic body. The glossy Pebble Blue colour is eccentric and has an obvious edge over the other variant, Marble White. The edges are glossy and retain the solidity of the design despite the absence of a metal framework.

The phone weighs 133g and feels very light. The 4.8 inches screen is balanced just right with a broad 8.6 mm central waistline instead of the chin that most Samsung phones bear. Read the following post about iPhone 4S and Samsung Galaxy S3 comparison if you need more information. 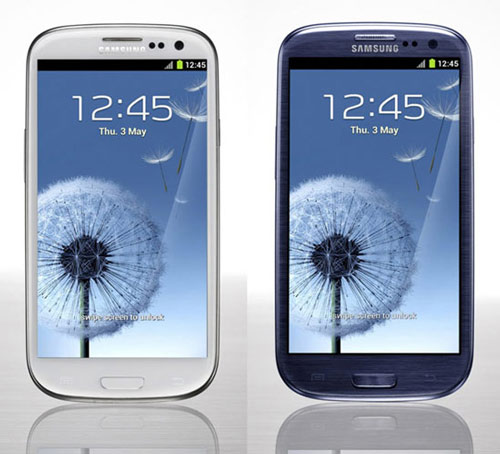 Galaxy S3 is a Pen Tile, which means that in spite of the 306 ppi density, pixilation is still visible due to sub-pixel sharing.
But only the microscope-eyed should have a problem with that as the screen is still invincibly good with 1,280X720 of resolution.

Here is the reason for S3 to be glorified, the incredible quad-core 32nm 1.4 GHz SoC processor!!! This revolutionary new chip is called the Exynos 4 Quad and is based on ARM’s Cortex-A9 design.

Samsung Galaxy S3 shows multitasking by a feature named Pop Up Play which allows the user to carry on doing tasks in the corner of the screen while watching a video at the same time.

Since all the cores share their power from a single battery, it is difficult for a mobile phone to have a quad-core processor and be energy efficient at the same time. This has been pulled off pretty well in Samsung Galaxy S3 and therefore it works well on limited battery.

As expected, Samsung Galaxy S3 comes with Android 4.0 Ice Cream Sandwich, precisely Android 4.04. To go with the new OS, S3 has a longer home button and as per expectations, you still get the Samsung TouchWiz overlay but with a totally new and organized look. TouchWiz is considered to be the differentiation point for Samsung from other manufacturer’s android phones.

The voice control in S3 has also been modified and reworked upon, giving it a new name ‘Smart Voice’. When you are away from your phone for a while, there is a feature called Smart Alert which will vibrate as soon as you pick up your phone and let you know what has happened since you left, like an e-mail, text, etc. In addition to that, there is a sensor named eye tracker, which detects when a face is in front of the screen and increases its brightness. With all this, the new S3 has introduced some spectacular features that are unparalleled by most of the Smartphones. Along with all this, the S3 features GPS, barometer, gyroscope and screen flipping accelerometer. It has every band of Wi-Fi, powerful Bluetooth 4.0 and also transfers files through the S beam on touching the phone.

Samsung Galaxy S3 comes with a 2100 mAh removable battery which claims to give 8 hours of battery backup. Wireless charging option is another commendable feature of Samsung Galaxy S3.

The Galaxy S3 bears a much capable 8-megapixel camera with autofocus, LED flash, geo-tagging, touch focus functionality, face/smile detection, image stabilization and 1080p video recording that we have already seen in the Galaxy S2 and Galaxy Note. There is a 1.9 megapixel front camera with 720p resolution. There is a real boost in the speed of taking pictures by about three to six frames per second depending on manual or burst modes.

Samsung galaxy S3 has created a rage in the market with all gadget freaks craving to get their hands on this freaking awesome device. It’s quite a revolutionary device which is efficient, fast, loaded with superb apps and extremely reliable. It’s here to stay for sure!!