The first images of a Samsung smartphone with a side-slide QWERTY keyboard were revealed a few days ago and we didn’t know if it is another new product from Samsung. BGR has just confirmed that this is actually a variant of Samsung Galaxy S II for AT&T. (updated below)

The model number of this device is SGH-I927 and it will run on Android Gingerbread 2.3.4. Galaxy S II is currently the best selling phone of Samsung but it has not officially arrived in America yet. According to some information, Galaxy S II will be officially released in the U.S. in August and we can expect the SGH-I927 would be launched on the same day.

The apparent difference of the 2 versions is the physical QWERTY keyboard. The 4-row keyboard is added with 4 tall buttons on the left and right for search, home, menu and back functions. Undoubtedly, this will be a blockbuster of Samsung in the market share as people always want a hardware keypad for their devices. Therefore, Samsung wouldn’t have to worry about the Galaxy S II even when the iPhone 5 could be released this September. 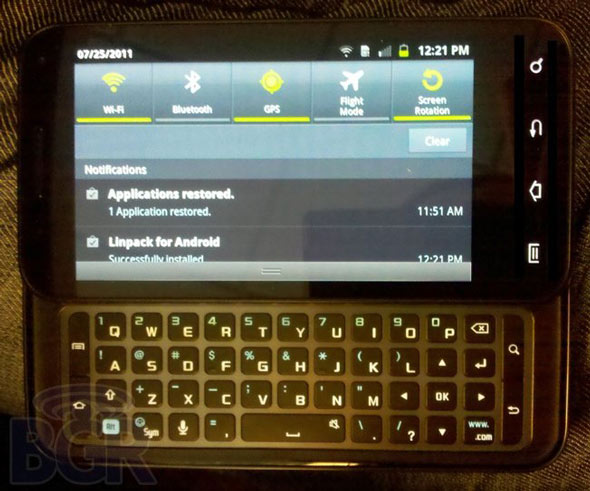 Many consumers don’t consider buying an iPhone because it never has the physical Qwerty keyboard and Apple doesn’t intend to change its design. I’ve seen how they’ve struggle with using a capacitive touchscreen keyboard, it is particularly difficult for users that have long fingernails or big fat thumbs. The Galaxy S II is a powerful smartphone that have all advantages, so let’s wait and see its success.

Update: This is actually the Samsung Captivate Glide, it features a side-slide QWERTY keyboard, a 4-inch, 480×800 Super AMOLED screen, a 1 GHz dual-core Nvidia Tegra 2 CPU, 1 GB of RAM, and 2 cameras, a 1.3-megapixel one at the front and a full HD 8-megapixel one at the back. Check out the video: