At the IFA trade show in Berlin today, Samsung has introduced its 2 new Galaxy-branded devices including 1 smartphone and 1 tablet. The smartphone they mentioned is Samsung Galaxy Note and it seems like our predictions have become true, this is a new type of smartphone with an enormous 5.3 inch screen and a … stylus.

The Galaxy Note sports a giant Super HD AMOLED Screen with 180 degree viewing angle and the resolution of 1280 x 800 pixels. This has blurred the border between a smartphone and tablet, someone even considers it as a Galaxy Tablet junior. The massive screen is great for smartphone users’ experience, however, it could also be unpocketable for many ones. Besides, the handset also has some great features, such as a dual-core 1.4 GHz processor, 1 GB of RAM, 16/32 GB of storage memory, an 8MP rear camera and a 2MP front-facing one for video calls. Needless to say, it runs on the latest Android 2.3 Gingerbread with TouchWiz UI layer. 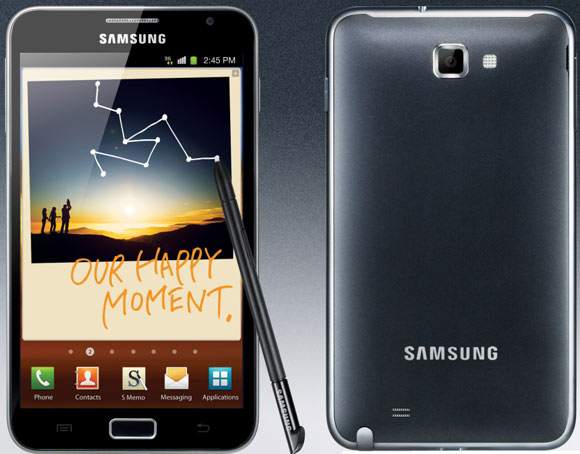 Another notable technology of the Galaxy Note is a stylus called the S pen for drawing and note-taking. We thought that the stylus was outdated but it has come back strongly and now is featured on many devices like HTC tablets and this smartphone. The stylus is slotted into the phone, so it is very convenient to use it as well. We could take advantage of the pen’s capabilities for accuracy and control when editing captured videos or pictures, draw and send handwritten images and notes.

I don’t know if it would be a successful device but it is definitely in my wishlist now. What do you think about the new Galaxy Note?