Galaxy Note 4 is said to have either faux leather back with stitches just like Galaxy Note 3 or a dotted back like the latest Galaxy S5. This seems reasonable since a lot of people actually appreciated the new back design that Samsung adopted for its previous two devices. The faux leather back on the Galaxy Note 3 is well received by the audience and it looks like Samsung’s next Note device might also inherit the same feature. 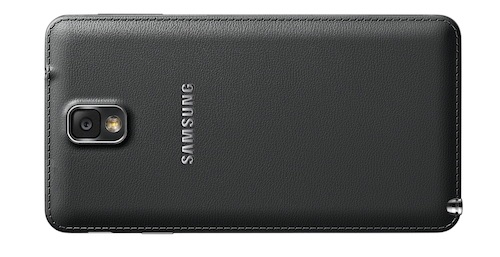 Note 4 will support USB 3.0 but will also support USB 2.0 for charging purpose. Another huge talking point is the display resolution of Galaxy Note 4.  The latest rumor suggests that Galaxy Note 4 will have 2K display with a resolution of 2560 x 1440. Don’t get excited over this as a lot of reports suggested the same thing for Galaxy S5 too but that didn’t happen. Still, there is more possibility of having a 2K display on Note 4 than Galaxy S5 due to bigger display.

It is also said that Note 4 will be the first device to use a 20nm processor in the form of either Exynox CPU or Snapdragon 801. Camera-wise, the latest Note 4 is expected to have 20.1MP camera with the same features found on Galaxy S5.

There is no information on when Samsung will unveil the new Galaxy Note 4. It has already launched Galaxy S5 sooner than its actual date so we might see the same thing for Galaxy Note 4 as well. But if we are to judge anytime, then it would be at the end of Summer, around September maybe.