Looks like a new smartphone and a new chip is not all we will see in 2014 from Samsung because they have been working hard on increasing RAM in their smartphone and they have finally done it.

Samsung announced their new 8GB DRAM which will be used in their next gen smartphones maybe including the upcoming Galaxy S5 as well. A mobile memory is different from that of normal memory so in Terms of mobile memory 8GB equal to 1 GB of LPDDR mobile memory. The memory is also DDR4 which is faster than the DDR3 and consumes 40 percent less power as well.

Samsung is the only one to come up with it and was able to fit such a high density memory of 8GB on a single die and the good news about is that around 4 of these (8 gigabits) can be installed in a smartphone giving it a total of 4 GB RAM. They have the same architecture of 20nm compared to DDR3 and will run 50 percent faster. Till now we have only seen 3GB of RAM on a smartphone and we have all seen how well it works on the smartphones making them really smooth and lag free so imagine what a 4 GB DDR4 RAM can do. 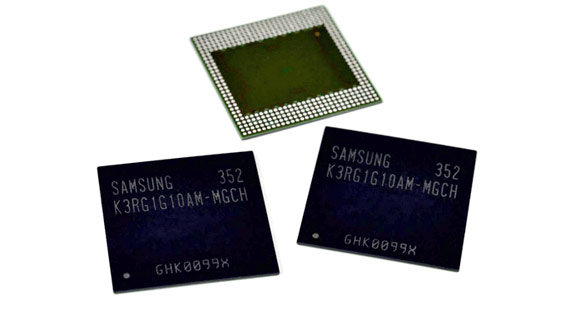 Samsung’s move towards 64-bit processor makes sense as they can access more memory than a 32-bit processor and now with their new RAM that won’t be a problem plus apps are getting bigger in size day by day and so is the OS on the smartphone with all their new features like multitasking etc. they all need memory and if you don’t have enough memory your smartphone will slow down or as we all know will start lagging and a 4GB DDR4 Ram means better screen resolutions, better speeds, faster applications and because of its low power consumptions a good battery life.

The memory chips are being mass produced by Samsung at the moment and will be ready in time for the smartphones yet to come from Samsung in 2014.