Sticking to its policy of releasing office after the launch of new windows, Microsoft has unveiled Office 2013 after unveiling the new Windows 8. The new Office 2013 from Microsoft has got a Metro transformation, coming with a touch interface along with loads of new feature, with great emphasis on Cloud like subscription fees, demand based installation and syncing of all the files that you save on the Cloud.

Microsoft Office 2013 takes the simple and plain features of Metro and puts them to use at desktop applications. With this your document is in the forefront and the features like ribbon fading in the background. The company has worked hard towards improving the layout; now you can directly implant the videos directly in Microsoft Word and play them and can also paste the photos in the document directly from the Facebook account without saving them first. It is now much easy to place the pictures at the desired spot with the help of alignment guides which appear when you drag the picture. The new layout also enables you to open the PDF files just like the word files. 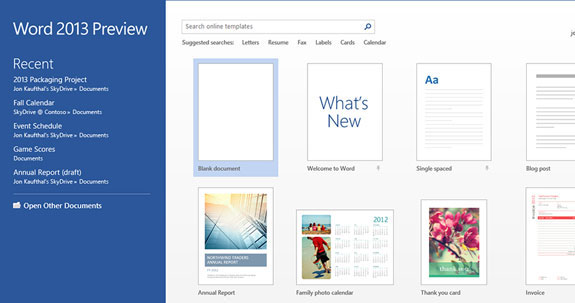 Excel also gets the similar interface changes as other components of Office. In the new Excel you can select the cells with the help of numbers and then Quick Analysis tools appear next to the selected cell with an array of conditional formatting. Microsoft Research gives a Chart Advisor and when you want to alter a chart then the series contextual tools that appear make everything a piece of cake. If you change the data on which the chart is based then the chart would not just update but animate to let you know that the change is happening. As you move from one cell to another or change the formula then there are certain subtle animations which will tell you about the modification and the place of the cursor. 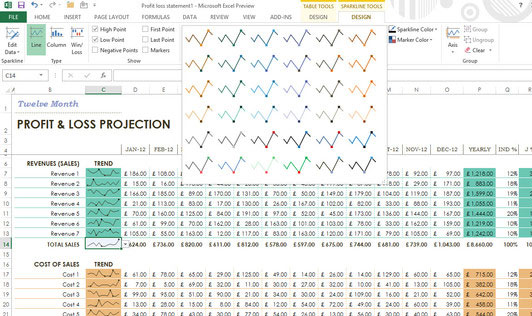 The organized interface works well for PowerPoint also. In PowerPoint also the tools slowly fade away in the background so as to let you concentrate more on your document. When the PowerPoint is opened you do not get a blank document unlike the previous versions but a welcome page like page which is full of options of latest thumbnails and documents for themes and templates.  From here you can access the free of cost templates available on the official site of Office. The new alignment guides assist you in the positioning of the object which appears when the thing in the slide is at the edge. In case of master slides you can have your own guidelines.

Microsoft Office 2013 is introduced to cater to a touch interface and in Outlook 2013 five frequently used commands appear when you will use it on a tablet. The features in Outlook 2013 make it very handy such as you can respond to a mail in main Outlook window. The address book has also been altered with better features. Photos from the social media sites can be used for thumbnail view automatically. It also automatically links the contacts if it thinks that they are same and add details from their Facebook and other social sites accounts.

Looking at the list of the features that Microsoft has come up with in its new Office 2013 we feel that these are indeed indispensable but if we come to think about it, Microsoft has not added something extraordinary to the overall package in comparison to the previous versions. The features that it has provided are to keep up with the modern times and could have introduced something which was more Microsoft-ish along with keeping pace with this age.