Apple’s latest product in the high end notebook range is Macbook Pro that comes with retina display. Although this latest product from Apple shares some of the basic features of the Macbook Air but it comes with improved performance and is more friendly to video editors, photographers and graphic artists. The most kindling feature in the latest gadget from Apple is its retina display. With 220 pixels in an inch the laptop comes with a resolution of 2880×1800 and jam packs more than 5 million pixels in a 15.4″ display which is way more than that in any HD TV. Owing to its pixel density the text and the images appear really sharp.

Using applications which are customised for retina display make the applications that are not customised for that display appear tawdry and tacky. For instance, a page in Chrome appears second-rate as compared to Safari. The new gadget from Apple comes with a LCD glass which reduces the reflection by 75% and a 29% better contrast. The gadget is as sleek as the company’s Macbook Air and does well without an optical drive similar to Apple’s Macbook Air.

When it comes to thickness, the laptop is almost equal to Macbook Air. At 4.46lb the product is somewhere between the previous version of Macbook Pro and Macbook Air. The 15″ screen is bigger than what you get in other Macbooks but in this product the screen reaches the edges and the overall experience of viewing anything on the screen is more pleasant. In its latest product Apple is offering 3.0 USB ports and also focuses on Thunderbolt technology from Intel. 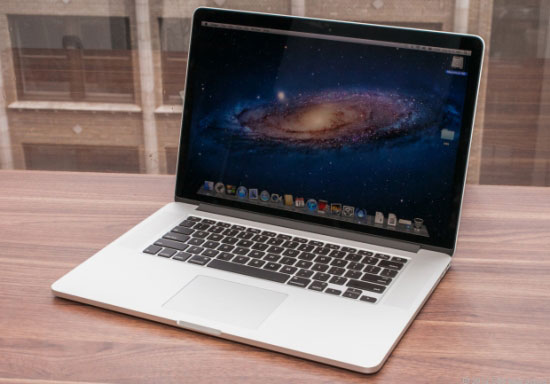 The less expensive of the two Macbook Pros is equipped with a 2.3 GHz i7 processor while the other expensive machine is powered by a 2.6GHz Ivy Bridge processor from Intel. With the help of Turbo Boost a speed of 3.3 GHz and 3.6 GHz is attained by the chips. If you buy the expensive model of the two models from the company’s store you can customize the processor to 2.7GHz. The Ivy Bridge processor improves the integrated graphics in the laptop. The fresh graphics chips increase the performance by 60%. The ultra-thin design helps the laptop to get rid of the internal hard drive and instead comes with solid state storage capacities of 256GB and 512GB, although the expensive model can be upgraded to 768GB while the other model cannot be upgraded in any case.

The new machine from Apple comes with a RAM of 1600MHz but you cannot change the Ram once you have purchased the gadget. The company has also made some minor improvements here and there so that the overall experience of using the machine pleasant. The speakers now come with improved sound quality. The fans in the laptop come with asymmetric blades which make less noise and are more efficient. 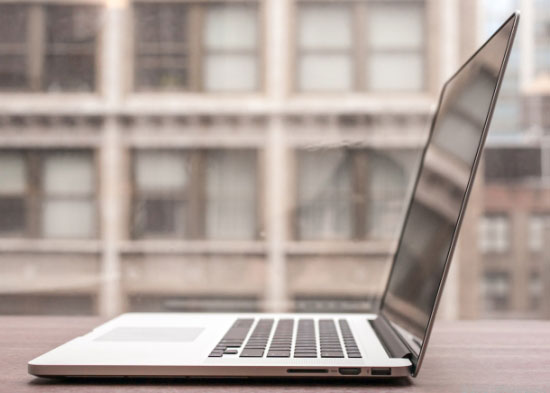 As expected from such a powerful machine the overall performance of the gadget is above satisfactory. The solid state hard drive proves to be of great advantage for the machine. The latest retina display along with the solid state storage reduces the boot time significantly. The battery will be enough for 7 hours if used normally. When you close the laptop the machine slips into the Standby Mode and will remain in that mode for as long as 30 days and will be ready to use as soon as the lid is opened.

The latest retina display Macbook Pro is amazingly with its clear and sharp texts and images. Comparing the same webpage in the Safari browser and Chrome browser will say a lot about the superior and better looking retina display enabled applications. The machine is very light and just 1mm thicker than the company’s Macbook Air. With a powerful battery the machine is ideal for those who are always on-the-go and the company has also enhanced both the USB ports to 3.0.

This new product from Apple is without any doubt least upgradeable device in the market. There are many non-standard parts in the device like the hard drive which is a solid state rather than the usual internal hard drives. Also, the battery in the gadget is glued instead of being screwed which makes its replacement costly once its life is over.

As expected from a notebook from Apple, the Retina display Macbook Pro will cause a large hole in your pockets. The two models come with price tags of $2199 and $2299 which is more than any other notebook in the market. But the features in the gadget for the photographers and video editors might be worth the price for these people. You can order the Macbook Pro on Amazon now.

If the price of the gadget is not an issue then you should not have any second thoughts. With its solid state storage the machine is definitely a thing of future. Based on the sleek and ultra-portable concept of Macbook Air this series of laptops will lead to decline in the significance of optical drives. The 15″ gizmo is a stellar piece of hardware and worth admiration with its powerful hardware.