Some time ago a news about Moneypenny hit the internet and there were rumors about it that it’s the codename used by Nokia for their new dual sim windows phones and looks like they were correct.

A screenshot of the smartphone got leaked on the internet confirming that they will be releasing two new Windows 8 smartphones Nokia Lumia 630 and 635 as they were codenamed Moneypenny.

The screen shot shows two networks supporting 3G on top of the handsets and the name Moneypenny is taken from a James bond movie. For a smartphone to support two sim cards and both with the ability to run 3G at the same time as well sounds rather amazing. Leaked pics also show the availability of Vine app, Maps, Mixradio and tons of other apps and shows no signs of captive buttons on the smartphone which leads to the conclusion that Nokia might get rid of them and come up with on screen controls. 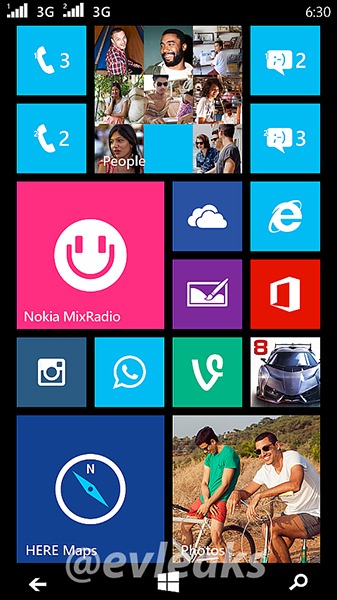 As far as the resolution of the Moneypenny goes it shows 480 x 854 but as we known that Windows 8 does not support that kind of resolution and among all the other resolutions 720 x 1280 has the same aspect ratio that of 480 x 854, so it is expected that the smartphone will have a 720 HD display. There is no actual release date on the smartphone but it’s good to see the company showing us some evidence of them working on it.