New pictures have purported over the internet showing the HTC One Max having dual SIM option and a removable back cover. The images also hinted on a possible fingerprint scanner application as the scanner app icon can be seen in the dropdown navigation menu.

HTC One Max inherits majority of the design features with the current HTC flagship device HTC One but there are few differences that can be seen in the two devices. The first one is the removable back cover of the device. HTC One didn’t had this removable cover option and its SIM slot was also not on back. The only reason why HTC One Max has the removable back cover is because both the SIM slots are at the back. Besides that, there is nothing else that the back cover holds. We even cannot see any microSD card slot at the back. 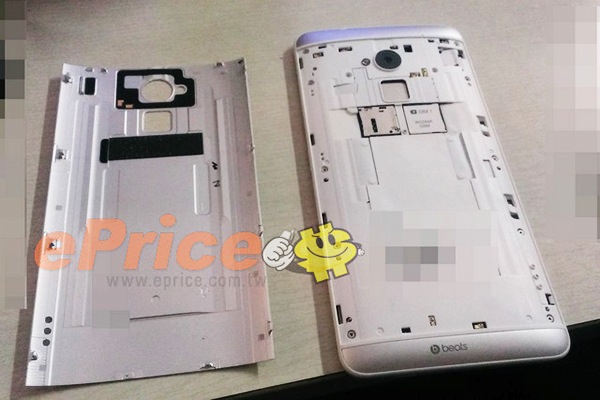 There is another interesting thing seen on the HTC One Max screen and that is the fingerprint scanner. One images shows the fingerprint app icon that looks to be inside the navigation menu at the top. Only the icon has been shown and nothing more about it.

If you have missed the previous rumors and news about the HTC One Max then here is a short summary for you. The device, supposedly bigger than the HTC One Max, might have a 5.9 inch display with 1080p resolution and a Quad Core Snapgradon 800 on board, UltraPixel camera and Android 4.3.3 Jelly Bean with HTC Sense UI 5.5. The official release date is still a mystery but we are guessing that HTC will announce it anywhere in September. September also host two more announcements of the new Apple iPhone 5S and the Samsung Galaxy Note 3. So stay tuned for more updates.