Today, Apple announced a couple of additions to their product lines. We will tackle all that was announced in a series of two articles, one focusing on the star of the show, iPad along with iOS, and another focusing on Mac additions and various other tidbits from the event. In our first article in the iPad Mini Event Overview series, we talked a bit about the iPad and iOS announcements at the event. Now, we will go more into the other performers of the show, the MacBook Pro and the iMac, with an honorable mention for the Mac Mini.

As with any event, Apple is known to announce a bit about what each product has been up to for the last couple of months, before bombarding us with an even better improvement. Some points that Cook mentioned about Mac is it’s placement among the other computers on the market today. Many of the points came to no surprise, like Mac being rated as the #1 desktop and notebook on the market today. Other information included that the best selling Mac was the MacBook Pro 13-inch. This made Apple notice that their upgrades should be in that department.

The MacBook Pro line was updated with a much thinner build, about .75 inches thinner than the predecessor. This is also in part due to the MacBook Pro being sans an optical drive this time around. The 3.5 point, lightest 13-inch MacBook Pro is being released, comes with a Retina display, the newly released USB 3.0 ports, and a dual mic on the side. One common complaint about the Retina display on the predecessor was the glossy finish producing glare. The new MacBook Pro now comes with 75% glare reduction and IPS technology for a 178-degree wide viewing angle. The MacBook Pro now comes with all that we expect, the HD FaceTime camera, stereo speakers, and the choice of the Intel Core i5 or i7 processors.

The iMac Lost Some Weight

The iMac caught many attendees by surprise today at the event. Not because of the announcement itself, but because of the look and build of the iMac being announced. Saying that the new iMac is thin is an understatement, this thing is super thin!

For a desktop that has the guts and the screen all in one place, something had to give. Instead of a fully paper thin build, the new iMac had to compromise with super thin edges. At 5mm thin, the new iMac is 80% thinner than the predecessor. 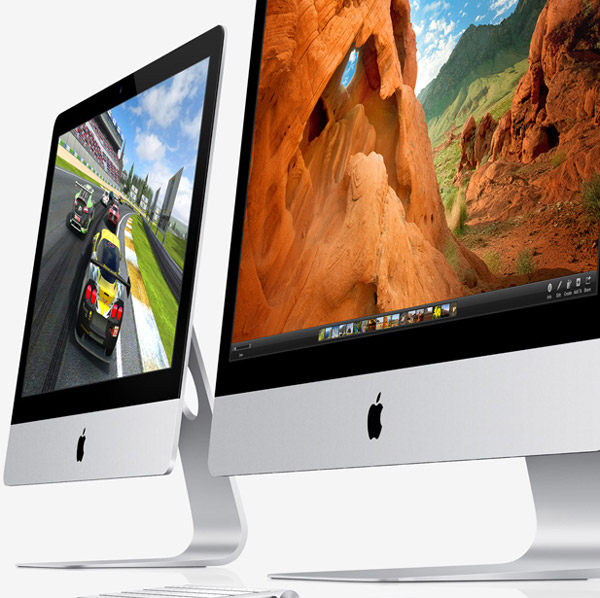 The new iMac has an HD FaceTime camera and a dual mic at the top, with speakers placed at the far left and far right bottom of the desktop. This Mac can support up to 3TB of memory, support for both the Core i5 and i7 processors, and comes standard with 4 USB 3 ports and a SD slot. Some weight and bulkiness was also cut due to Apple’s new drive system known as the Fusion Drive.

A Little About the Mac Mini

The Mac Mini was a desktop that was mentioned in the event only because they had to get the minor changes across. It was quite apparent that it was a desktop they would have rather skipped on announcing after such a huge improvement with the iMac, however there are many consumers who find great benefits from the desktop that’s a bit over half the price of the lowest priced notebook model (the MacBook Air 11-inch). The Mac Mini’s updates are all internal. There is now support for 1TB of memory on the hard drive disk, 256GB on the SSD. Plus, the RAM has up to 16GB of support. The 2.5 GHz model, with 4GB of memory and 500 GB on the HDD will sell for $599, the $999 model will include 2.3 GHz processor, 4GB of memory, but two 1TB hard disk drives.