iOS 7 gets its first ever update that fixes a security loop hole that was found in the iPhones running on iOS 7 the day it started rolling out on the devices.

Apparently, a user can bypass the security lock screen without entering the passcode and getting access to all apps. This security flaw was spotted by majority of the iOS 7 users that shifted to the new iOS the day it was made available.

Apple security chief said that the new iOS 7.0.2 update is only meant to fix this issue where user can bypass the iPhone lock screen and then getting access to all the contents on the mobile phone. This was a huge mistake by Apple and no wonder that really shocked them that it occurred anyway.

Bypassing this lock screen security also meant that the user who is not authenticated, can have access to all of your accounts including mail, Facebook, Twitter, Flickr and the photos on your iPhone as well. God knows what a person can do if he happens to bypass the security lock.

The update iOS 7.0.2 is just 17.4MB in size and if you are using an iPhone, you will see it in the General tab under software update. 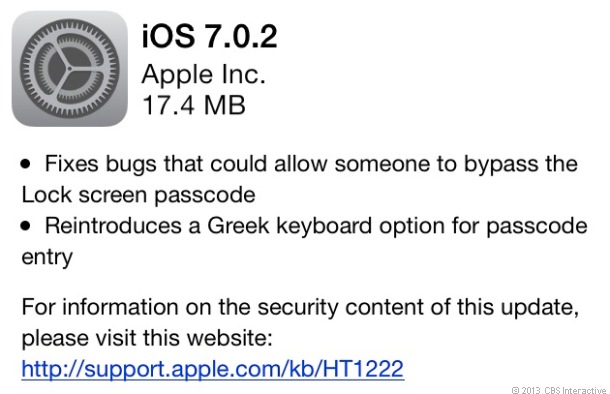 According to Apple, the update also brings back the old Greek style keyword that was used for typing in passcodes that was not included in the original iOS 7.0.2 build.

Lock screen offered the primary defensive mechanism to safeguard your phone from unwanted people accessing your files and apps. Although Apple has introduced a new Touch ID sensor that also acts as a security lock, majority of the people still use the traditional security loophole. And with the fact that recently, Apple Touch ID was hacked by a German group didn’t left people much convinced on using that as a security measure. But it is said that Apple intends to use the Touch ID sensor technology on all of the iOS devices coming in the future with necessary upgrades to avoid the hackers attempts to hack it.