There is no conformation about the existence of a Huawei Ascend P7 smartphone from the company but there are rumors about this new smartphone from Huawei code-named Sophia which is also considered to be the new Huawei P7.

A screenshot got leaked in China showing that Huawei Ascend P7 Sophia will be running the Android Kitkat 4.4.2 with their own Emotion UI 2.3 and will be the first smartphone from the company to be running Kitkat out of the box if everything was correct about the smartphone and it came out on the date it’s rumored to. 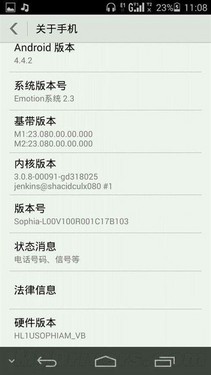 Looking at the hardware on this smartphone sure gives a good impressive as the smartphone will have a 5-inch display with full HD resolution, 910 quad-core processor clocked at 1.6 GHz, 2 GB of Ram, 16 GB internal storage, 13MP back shooter while an amazing 8MP front shooter, LTE support and 2300mAh battery.  The camera on the phone sure looks like a selling point for the Huawei P7 and it is said that the P7 will resemble the P6 a lot so we are sure it isgoing to be one of the thinnest smartphones out there. The smartphone is always said to be made out of “exquisite materials” which can be the same metal body construction on the P6 or even better. If the rumors were correct then we will get to see the launch of Huawei Ascend P7 in March and the smartphone will hopefully be available for purchase in April 2014.

The price of the Huawei Ascend P7 might range from $500 to $570 dollars depending on the company they might even come out with two separate versions one with LTE and one without LTE, but the prices of LTE chips are supposed to drop in China really soon so the price may drop a notch.