In 2013, the race for best Android smartphones is competitive than ever. While Galaxy S4 takes forward the legacy of Samsung’s successful Galaxy S series, One is HTC’s bet for bringing the top of the line features in a smartphone.

Both are getting good reviews from tech community and users alike, but which one is best for you. Instead of doing regular comparison between these two smartphones based on hardware specs, we bring to you what sets them apart from each other. For more details, you can check out our HTC One and Samsung Galaxy S4 review.

HTC One has been garnering appreciation for its sleek aluminum body giving it a very distinct and classy look. The body have been chiseled from a single aluminum which means there is zero gap between the body and its display, though it also makes the battery non-removable. The use of aluminum makes the body thick weighing at 143 g. 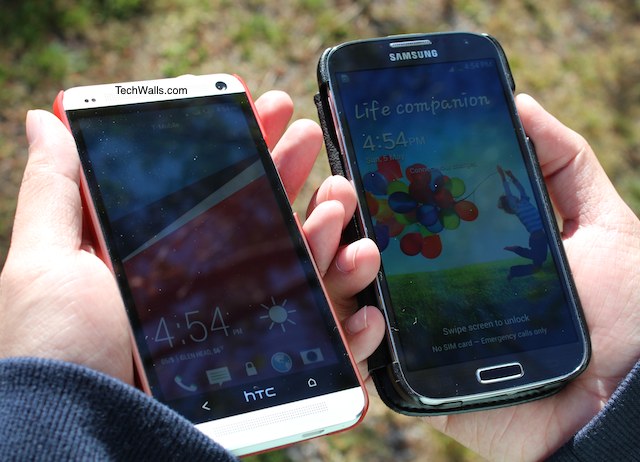 The use of plastic body Galaxy S4 design is very familiar with its predecessor- Galaxy SIII or for that matter other Samsung smartphones like Note 2 and Galaxy Grand. But, it seems Samsung has been able to make S4 slimmer and lighter than its predecessor weighing 130 g. Its back-cover is also removable to reveal battery and slots for microSIM and microSD cards.

Hardware at a Glance

HTC One has taken a bold step for its camera, instead of going after the number of mega pixels, the camera has 4 MP sensor, but packing in more amount of pixels, calling it as ultrapixel.  The camera works well in low lightning conditions, though isn’t comparable with smartphones having better MP camera in normal conditions. Apart from basic features like face detection, geotagging, etc., HTC has introduced an interesting manner of capturing instances called as Zoes. Zoes are like a short video of 3.6 seconds which are shareable on HTC’s zoeshare website or to various social networks. HTC One also have a 2 MP front camera for video calling purposes. HTC has dual speakers at the front, which they call as BoomSound making the songs really loud.

The screen of Galaxy S4 is slightly bigger than HTC One’s. However, I prefer the Super LCD3 screen of HTC One because it looks brighter and it produces colors much more accurately than the Super AMOLED display on Galaxy S4. It makes the whole watching experience much better on HTC One.

Samsung has packed a 13 MP primary camera in S4 with auto focus and LED flash. It’s also capable of taking videos at [email protected] Its secondary camera of 2 MP is also able of taking Full HD videos. S4 has a single speaker which is loud enough, but still incomparable to HTC One. It has lots of innovative features for camera like:

HTC One runs on Android 4.1.2 (JellyBean) with its own customization on its top called as Sense. HTC have added a Blinkfeed on One’s home screen- which is flipboard like magazine providing user with the latest happenings around the world (curated content based on user’s selection such as news, technology, business, etc.). It also provides friends update on social networks like Facebook and Twitter. HTC One has IR blaster, which makes it double up as a remote.

Samsung Galaxy S4 runs on the latest version of Android 4.2.2 with Samsung’s TouchWiz interface. Samsung has added tons of features on S4-

Not only these, S4 has many more software enhancements. Though, many of these features seems to be gimmick and may not find use in practical situations.

Both of the smartphones are equally good as an overall package of powerful hardware and intuitive software features. If you’re looking for making a style statement, then look no further than HTC One, it’s really one of the best designed smartphones ever. But, if you’re looking for software enhancements and good camera, then Galaxy S4 can’t be beaten.