HTC launched the HTC Droid Incredible 4G LTE in July this year sports a muscular look in partnership with Verizon. The new Droid Incredible is based on the previous models only this time it comes with more horsepower to do the tasks. Although the camera in this phone is this phone is without the popular HTC’s Imagechip sensor nonetheless the phone does not stop to inspire the gadget reviewers.

HTC’s Droid Incredible 4G LTE comes with rubber back which makes the phone more handy. The presence of the red camera circle makes the back side of the handset more appealing with the red colour Beats Audio sign. Micro USB on left part of the phone is there for charging the phone and volume buttons are there on the right hand side. HTC’s Droid is equipped a 4 inch LCD screen supported by 1.5 GHz Snapdragon processor along with 1 GB RAM. The internal memory of the phone is 8 GB and can expanded upto 32 GB. The phone also comes with a feature of Near Field Communication (NFC). 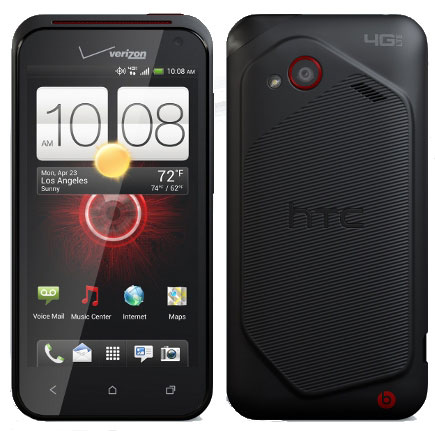 The phone runs Ice Cream Sandwich, Android 4.0 with the three buttons which we expect in a touchscreen phone. The Android’s multi tasking menu in the phone comes in a snap in contrast to other phones where it becomes sulky most of the times. There are several pre-loaded games trials and various applications by Verizon. The feature of Beats Audio is impressive and makes the music experience pleasurable.

The battery life of HTC Droid Incredible 4G LTE has been terrific and battery life something which is not to be worried about. Although the 4 G connection tends to affect the battery life but the 1700mAh battery in this phone works well with the processor of Snapdragon S4. It the phone is subjected to light usage the phone will manage to stay alive for about 15 hours. In the standby mode the phone’ battery has proved itself again with an amazing 30 hours capacity if the phone is left untouched.

HTC’s phone is equipped with an 8 MP rear facing camera along with LED flash with the capacity to shoot 1080p High Defination videos and a VGA camera in the front. The rear 8 MP camera is awe-inspiring taking wonderful photos in dim light or out in sun. The captured photos are vivid in colours and sharp. The phone also succeeds in shooting magnificent videos by capturing 1080p video at 15 frames in just half a second. The camera is solid but sans an exclusive shutter button although HTC’ ImageSense makes up for it.

The phone from HTC costing $199 is worth its price. The phone is not the sleekest, best and the one with a large screen but it is definitely a phone with the backing of stunning specifications to muddle the people between Samsung Galaxy SIII and this product from HTC. It’s the brilliant package which is not too heavy on the pockets with respect to its specs. As working on large 4.8-inch screens becomes difficult with a single hand HTC’ Droid Incredible appears to be a big relief carrying all the features of smartphones way too costlier than this phone.

HTC’ Droid Incredible 4G LTE is phone which comes with stellar 1.2GHz processor and the 8 MP camera but the overall design and features direct our thoughts to the back step that the company has taken. The tiny 4 inch screen is not at all the true HD screen that we expect and the fubsy chassis strikes the semblance with the first Droid handset that was launched a few years back. At the price that the company is asking for, it should be giving an HD display not LCD display (or fake HD). The phone is also thick and weighs 4.64 ounces making it heavy by today’s standards.

HTC’s Droid 4G LTE leaves with translucent feelings. The 4 inch display is a thoughtful step and the specifications are no less than appealing. Also, HTC and Verizon just redesigned the aging handset with little tweaks here and there without any effort to upgrade the old formula according to the modern times. HTC has to launch something else in order to change the game as Droid Incredible is no game changer. Paradoxically, Droid Incredible 4G LTE has failed to justify its incredible name.