Although there is one catch here – the discount is applicable only in Australia, Canada, Germany, Spain, Korea, and the UK. This is one bold move from Google considering that majority of the high end smartphones like Nexus 4 are available on contract at the same price while the Nexus 4 is completely unlocked and contract free.

This can indicate something related to the next Nexus device but the rumor mill for the Nexus 5 is still not hot. But the move taken by Google over the Nexus 4 is truly a ground breaking strategy and it might boost the Nexus 4 sales as well. Even on the actual price tag of $299, Nexus 4 was not a bad bargain but now for $199 is a total snatch and grab and run. Besides that, the cut in price can also be due to one year anniversary of the Nexus 4 in the next few days. 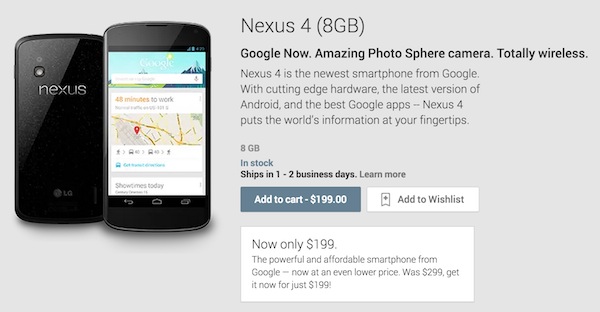 If you are thinking that this might be a downgraded version of the actual Nexus 4 or that you will not get the accessories etc. then you are wrong. It is the exact same Nexus 4 that you were getting previously, except that it is $100 cheaper this time.

It is available only in selected countries but we think that Google might also reduce the price for some of the biggest countries of Asia as well since majority of the market in Asia revolves around $200 range and if Google plans to launch the same campaign there as well, the graph of Nexus 4 sales can increase significantly there.

Show us your excitement about this great news and tell your friends living in those countries to grab one as quickly as they can.