Facebook announced late last month that it wanted to shell out $19 billion to acquire messaging titan WhatsApp in a move that once again highlights the company’s bullish approach to staying competitive. Is that valuation fair?

Overpriced! So exclaim some analysts and pundits who have racked their brains trying to rationalize the seemingly disproportionate investment in a $20 million company, though praised the deal too after Facebook shares closed at $71.44 on NASDAQ trading following its announcement. The surprisingly huge amount of the acquisition comprises $12 billion in Facebook shares, $3 billion in restricted stock units and $4 billion in cash. Several investors were baffled and far too many are at pains to understand why WhatsApp is valued at more than the market worth of bigger companies.

Beyond the business backdrop, the social networking giant’s move is plainly intended to subdue an impending cutthroat competition with WhatsApp, which has exponentially increased its user base where Facebook and other social media have progressed at a relatively low pace. 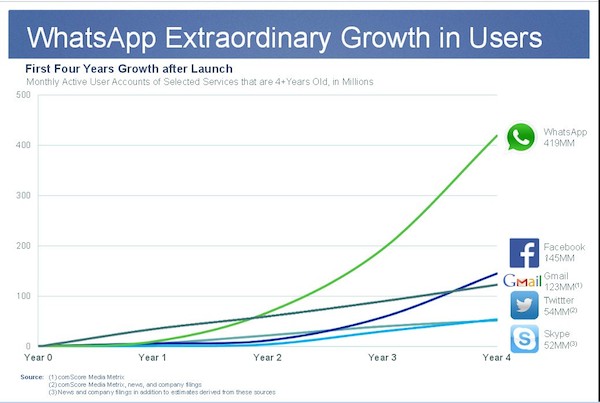 For a clearer comparative study, take the four-year growth rate of WhatsApp and Facebook. Four years after its inception, the social media giant attracted nearly 150 million users while WhatsApp eclipsed that growth with more than 400 million users within the same time period.

Facebook achieved the one billion-user mark in October last year after more than eight years since it went online. If WhatsApp could carry forward its momentum of adding one million users each day and reach beyond that point, the messaging app is indeed on track to surpass Facebook’s feat at a much faster rate.

By August 2015, more than a year after its acquisition by Facebook and during which time it will be celebrating its sixth anniversary, WhatsApp will have reached one billion users based on that rate, which means it will have eclipsed Facebook’s growth by more than two years.

There’s no stopping Facebook from buying WhatsApp. In fact, Facebook Messenger for Windows has just shut down on March 3 and is available only via Android and iPhone – a foreboding indication that the social networking site is intent on replacing its home-grown messaging app with something new such as WhatsApp.

But the only inevitable outcome of it all is that WhatsApp’s user base growth will eventually reach its terminus and new users will be harder to find. Worse, it could reach the point where it will gradually lose some users like what happened to Facebook, which was left behind by a great portion of its teen users.