It is still early 2013 and tech enthusiasts must be the happiest people now and there have already seen some significant changes on the smartphone market.

There is no more the domination of Samsung Galaxy S3 or iPhone as a few years back. We have seen some big manufacturers announce their flagship smartphones in the very first months of the year and BlackBerry Z10 is bringing a lot of expectations.

The new BlackBerry Z10 is set to launch on January 30 and available very soon in the 1st quarter. After disappointments due to delayed releases last year, BlackBerry 10 finally arrives and from the first hands-on, it is very possible that Z10 could help BlackBerry gain the market share lost to Android and iOS. 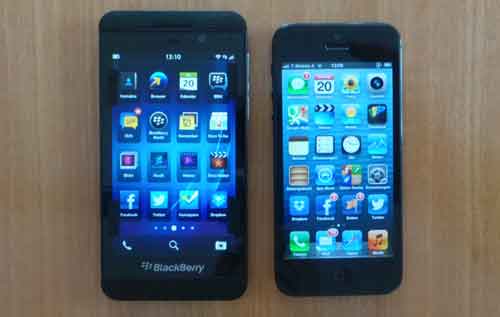 To see where Z10 stands on the smartphone market, we will compare the BlackBerry Z10 with the latest smartphone from Apple, the iPhone 5.

Check out the quick walk-through by telekom-presse to see the performance of Z10 and iPhone 5. You will be amazed at how fast BlackBerry Z10 is and it out-performs in almost every aspect. We will see the comparisons of BlackBerry 10 voice controlled app and Siri, multitasking and app switching, the app drawer, profiles and impressive BlackBerry Hub. In conclusion, this is the end of iPhone 5.