So Samsung is working on some new tablets for the year 2014. There are rumors that Samsung will be releasing 3 tablets with different screen sizes.

There is an 8.4-inch and a 10.1-inch Galaxy Tab Pro but what really catches the eye is the Galaxy Note Pro which will be 12.2-inch in size. As like all the other Galaxy Note series it will also have an S pen and with a screen size like that it would probably replace a good laptop.

A Samsung Slate did hit FCC in November having a 12.2-inch screen and according to the rumors that we got it’s got a quad core snapdragon 800 processor with 3 GB RAM and a resolution of 2560×1600. It is also said to have a 32 GB storage space and have two cameras an 8 megapixel at the back and a 2 megapixel at the front. 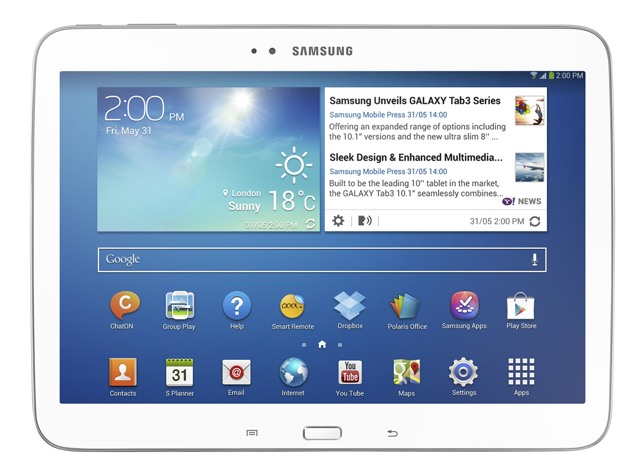 All we have for now is the picture that got leaked on the internet taken of the Samsung slate that arrived at the FCC last month and it is said to be running Android 4.3 out of the box, but that might be wrong as Android kitkat just came out and it will be a big letdown if Samsung comes up with a new Note not having the latest Android operating system. Galaxy Note series are also known for their amazing battery life that lasts for more than a day even with a heavy usage and it is said that Galaxy Note Pro will be equipped with a 9500mAh battery.

Nowadays everyone is going for slimmer, stylish and compact things like the Ultrabooks and with Galaxy Note Pro Samsung might be going for that segment of the market as the slate looks stylish from behind and thinner as well, with a fast hardware and up to date software as well. We will get too see more of all the other tabs as well as the Galaxy Note Pro in CES 2014. There is no actual dates on when Samsung is going to release them but it will be before the end of March hopefully.