It happened after the company reported its first quarter earnings of 2014 where its user base grew 25% to 255 million users. This is a step back from the previous quarter where the company saw a growth rate of 30%. Many investors take this as a bad sign and have sold out their shares, bringing the share price down. However, this is not the first time the company has let its share slide. Previously, the social media giant did hit a share price of $30.66. 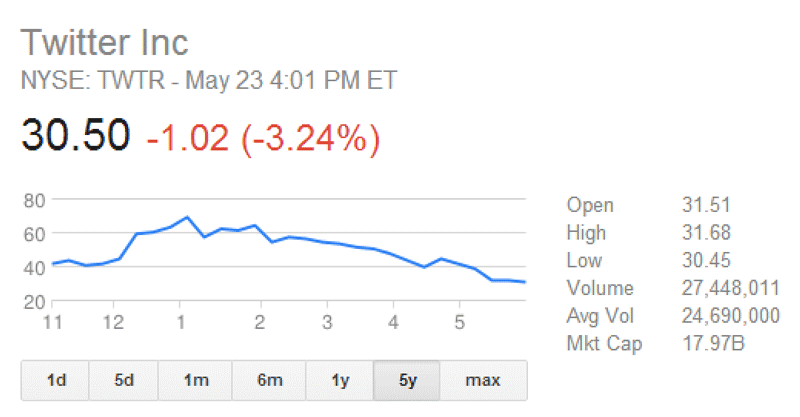 The fall of Twitter’s share price has been unbelievable. The company had a 52-week high of $74.73 per share. And an all-time low of $29.51. So what does this mean for the users of twitter? Well they do not have to worry about a thing. Because technology company shares are overvalued and exaggerated at the beginning. And if the company does not produce very great results financially, months from going public then they fall back to their original valuation. This exactly is the case that has happened with Twitter.

The thing to take from here is that the decline in the value of currently public technology stocks lowers the valuation of private technology companies as well. The firms that are incredibly illiquid and are owned by a host of founders, investors, employees, and, of course, family members. And when these private companies decline then we see its impact on everything from rent in San Francisco to the price of homes in Sunnyvale.

So how would Twitter cope with the decline? The answer is simple Twitter is here to stay as it is not defined by its profit margins. It matters as an authentic news source without any political influence.