With North America, UK and Australia set to witness and experience the launch of the much awaited Sony PlayStation Vita on February 22nd, here’s a review of Sony’s second venture into the handheld gaming arena, post the inaugural PlayStation Portable launch in 2005. PS Vita is sure to face strong competition from a wide variety of smartphones, and other dedicated handheld gaming devices from Nintendo and SEGA, mainly over issues including its steep pricing and the lack of high gaming quotient available in individuals in a fast moving professional environment.

PlayStation Vita has a full plastic body making it light and handy for long gaming sessions, a brilliant 960×544 pixel  5 inch OLED touchscreen, dual analog sticks, touch sensitive back panel, highly responsive and properly mounted direction and action buttons and a high performance PowerVR Series 5XT SGX543MP4+ quad-core GPU, packing in a very powerful gaming experience! The 3G WiFi model is priced around $300 and the WiFi only model around $250. Vita has an enhanced triple-axis accelerometer, gyroscope and an electronic compass, with a GPS radio (3G models only) ensuring high standard control options within the device. 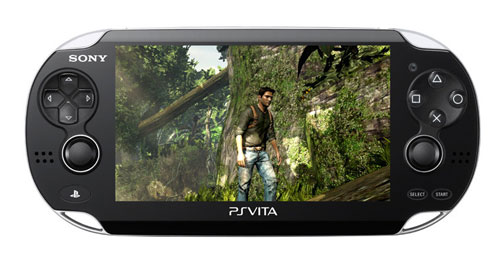 The stereo speakers sitting on the extreme side of both the analog sticks prove to be the biggest drawback in Sony’s latest offering, and it is advisable to use headphones for high quality gaming experience on the handheld console. Surprisingly, the primary camera produces poor pictures, with levels hardly matching those of your smartphones, although the support offered by these cameras for augmented reality games is fairly decent. The software used in the Vita is highly inspired by those used in smartphones, for easy movement through the apps and games and their ‘live areas’. The interface though efficient in functioning, lacks a certain appeal and appears dull for such a high end gaming console. Also, customers won’t be provided with any external memory support from Sony apart from the inbound 512 MB. A number of applications for Twitter, Facebook and Skype are to be made available for customers along with web browser and certain core apps even for your PSN.

Media support on Vita seems to be a visual and functional delight with transfers done with ease, flawless media playback and high streaming qualities. The battery works to its full potential with at least 5 hours packed with games, movies and music. Charging the device is no hassle either as it takes only around an hour and a half to get you to optimum usage levels.

There lies no doubt with the fact that PlayStation Vita is totally worth its price, as it is the best console you can get in the handheld gaming industry. If you plan to be kind on your pockets you are certain to be a part of a superior gaming niche!