Social Fiction, is a new sub-category of the parent Science-Fiction films. But what exactly does ‘social’ mean, and where does it come from?

Well, apparently, ‘social’ fiction will have to do with things that people share with other people in the world (that is the definition of social) through Social Networks, just like stories posted on Facebook, Twitter and many other services. A former Nickelodeon Animation storyboard artist (Steve Lowtwait) and a Facebook employee (Michael Smith) have teamed up and created this new form of entertainment.

So, what you may not know, is that the characters of each plot (or story) will have their own Facebook and Twitter profiles, and they will be posting just like real humans do. In Steve Lowtwait’s and Michael Smith’s case, there is a new story that is being told throughout social media. It is a story around ‘’Hawk Funn, Father, outdoorsman, entrepreneur’’ , as being described in the SteveLowtwaitStudios.com Website. Profiles have been set up form the authors at Facebook and Twitter and the characters’ lives are being posted, just like real humans’. You can get updates about the plot and learn about his life, if you follow him on Facebook and Twitter. 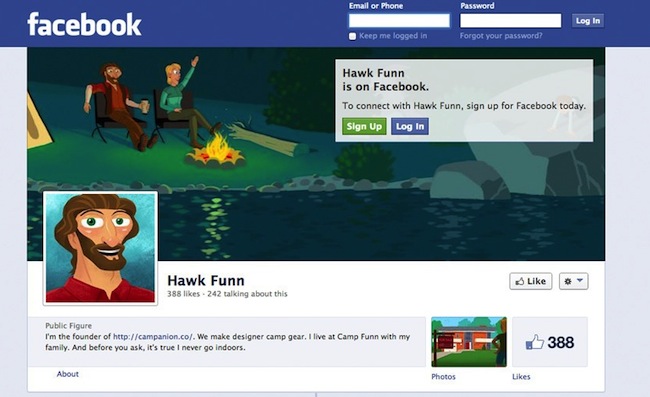 “When someone interacts and comments, the characters will comment back,” Lowtwait said, adding that he and Smith – a California-based Facebook employee – are currently writing the characters’ posts.

So, the next time that you will not be satisfied by the plot, you can post or tweet your feedback to a social fiction character.

Social Fiction: Is it worth?

The idea for Hawk Funn was inspired by a marketing concept Lowtwait was working on for another project.

“Social fiction kind of spans the entire Internet: It’s got to have the websites and other social accounts that support the story, blending fiction and reality to create a whole world. And I think there’s possibility for an industry to grow up around storytelling like that,” he said.

Designing digital characters is not that easy. When Lotwait worked for Nickelodeon, his illustrations were all hand-drawn on paper. Now, that the whole thing has gone digital, he decided to use an iPad for the new illustrations on Facebook. “The development of it is, in a way, a lot like animation … you have to create characters and design them,”  he said.

Although ‘’Social Fiction’’ seems to be something new, it isn’t. Some people say that this project (Hawk Funn) is similar to another project four years ago, called ‘Valemont’, for MTV. Whatever the situation is, the conclusion is that Social Fiction’s work is not done here. We have many other projects to see in the next years. And, that’s because social media are expanding more and more every day and more people are getting involved.