Snapdragon 805 is Qualcomm’s new development platform and with the help of Intrinsyc, they have created a developers tablet that is equipped with the latest Snapdragon 805 processor. Now what’s exciting about it is that people won’t have to wait till summer to get their heads on one of these tablets. Qualcomm will start shipping these developer tablets to all the developers out there who are interested in testing their apps and games with the next gen hardware, starting this month. 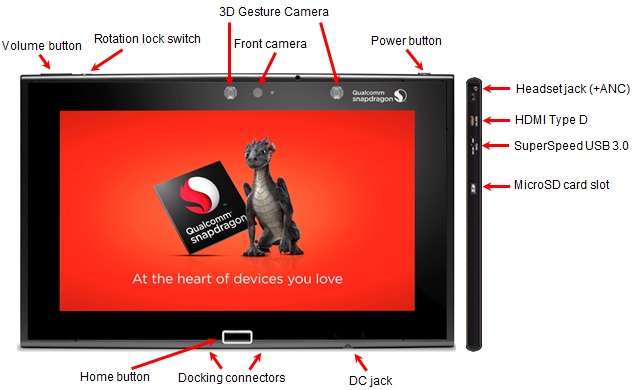 The tablet will have a quad core Snapdragon 805 processor clocked at 2.7 GHz and an updated Andreno 420 GPU which brings next gen gaming graphics and features like geometry shaders and hardware tessellation for the first time into mobile gaming. There is also a separate chip known as Hexagon QDSP6 V5A which is clocked at 600 MHz and will handle all the sensors present on the tablet.Screen size of the tablet will be 10 inches with a resolution of 2560 x 1440 coupled with 3GB of DDR3 ram to support that high resolution.

The tablet also has a 13MP shooter at the back with 4K video recording while a 2MP camera at the front also coupled with two additional 3D front facing cameras that will be used to recognize hand gestures. There are 7 microphones on the tablet which means that a person can record 7.1 audio as well as play it back with 7.1 channel speakers present on the tablet. The device is said to be powered by a 3400mAh battery.

The tablet will be available later this month and will cost $800 dollars. The price tag is high but we should expect much lower prices when the actual devices will hit the market. It is not necessary that the actual devices will have all these features but Qualcomm is giving us an idea about what its new Snapdragon 805 processor might be capable of.