Just a week ago, Samsung revealed their flagship smartphone, the Samsung Galaxy S4, at the Unpacked event. Galaxy S4 stunned the world with its amazing features and by that; the Galaxy S4 is destined to success.

Design and Features of the Samsung Galaxy S4 mini (expected)

From the looks of the mobile in the pictures, it looks like Samsung is maintaining the same form factor except for a smaller size of course. Same rounded edges, glossy plastic surface and Samsung inspired user interface. The word mini implies that the new set will have lower specs as compared to the Galaxy S4. The specs there were also leaked along with pictures are:

There is nothing more about the hardware specs of the Samsung Galaxy S4 mini. No details were given about what type of SoC will be used and how much RAM is going to be there.

There is also nothing about the NFC tags being introduced with the Galaxy S4. Although we might see something like S-Beam support

We, at Techwalls, think that it is a great move from Samsung if it is true that they are going to introduce a budget version of the Galaxy S4. Especially for people who really want to get their hands on Galaxy S4 can now wait for a low cut version of it, by only compromising on the least amount of specs, in the form of Samsung Galaxy S4 mini.

Price tag is still unknown about the Samsung Galaxy S4 mini but it would be about 20 to 30 percent less than the original price tag of Galaxy S4. The device is expected to be released in Summer around June or July. 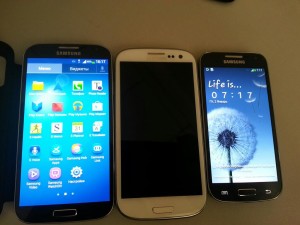