Mobile World Congress (MWC) 2013 saw one of the most awaited launches of the year – the Galaxy Note 8.0 tablet that is loaded with quite a few refinements aimed at making users’ mobile life simple.

Samsung has designed the Galaxy Note 8.0 such that it gives users the ability to utilize the S-Pen to the fullest of its potential while still maintaining the one-hand usage comfort – though people might have to stretch their hands to the limits. The Note 8.0 boasts of a considerably larger display where users would easily be able to draw and take notes and even write – as the situation demands. 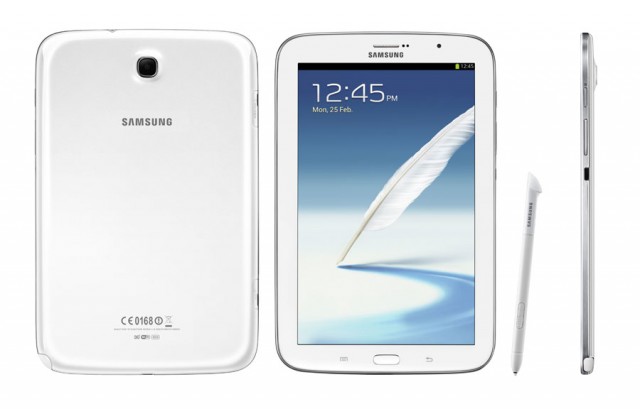 The Korean electronics giant has put in a quad-core processor into the Galaxy Note 8.0 but the model is unknown at the moment. We believe that Samsung won’t be going for any other chip other than its own Exynos chip that will feature four Cortex A9 CPUs. The tablet will boast of 2GB of RAM. Display is an area that Samsung has worked a lot considering it has to compete with iPad Mini. With an 8-inch screen capable of 1280 x 800 pixel resolution, the Note 8.0 provides the same resolution as that of the Galaxy Note 10.1.

Note 8.0 will be made available in two variants – one with only Wi-Fi while the other having both Wi-Fi and HSPA+ support. GPS is supported by both the variants but the latter variant will also support Glonass. S-Pen comes as a standard and the tablet features a 4600 mAh battery. Finally, when it comes to operating system, Samsung has gone ahead with Android 4.1.2 and users will be greeted with nearly the same look and feel as on Galaxy Note 10.1 and Note 2.

Considering the lineage – Galaxy Note 8.0 and Galaxy Note 2 can be considered cousins but, the increase in the screen size of the former will definitely allow users to use the device is more elaborate ways as was not possible was the Note 2. Taking a few examples – multi-window is a feature that will come out with flying colors in the Note 8.0; and writing experience would be magnified.

Samsung has loaded the Note 8.0 with Awesome Note, which is more adequate for writing and intensive note taking and suited for larger screens as compared to S-Note.  Smart Remote will convert your Galaxy Note 8.0 into a high-tech universal remote thereby merging TV remote and TV Guide in one place.

Another thing that would attract users is the tablet’s ability to act as a phone as well in select countries – if the telecom providers allow the functionality. This is one thing that is missing in the iPad Mini and users are eyeing a tablet in this segment may very well go for the Note 8.0 if they have this feature in their country.

Note 8.0 will most probably find large number of takers as compared to its predecessor – the Note 10.1, because of its smaller and portable form-factor. Samsung would have a great ‘pen’ following considering that a 8-inch screen definitely providers a lot larger base for the use of a pen and with faster hardware, the tablet will perform a lot better than its siblings.