Again in the last quarter of the year, we are seeing the competition between two tech giants, Samsung and Apple. This year, they’ve announced their products, Samsung Galaxy Note II and iPhone 5 almost at the same time and both of them will start shipping within 1 month.

Although Samsung has recently lost in patent lawsuit to Apple and was fined $1B in the US, they are still very confident in the success of the upcoming flagship smartphone. The first version of Galaxy Note hit 10 million sales last month and Samsung expects that the Note 2 will do twice as well as the first one. The unit sales are amazing if we look back at 1 year ago, when all people think that the over 5-inch phablet is too big to hold on hand. Now this seems to be the feature attracting customers as they seem to enjoy the big scren and the S Pen for taking note and creative stuffs. The Galaxy Note 2 is even offering larger screen but its size is not, so there are a lot of expectations in the powerful device.

On the other hand, iPhone 5 had a successful but not surprising announcement. As expected, iPhone 5 has bigger screen, 4G LTE, A6 chip and some minor improvements. They are not really striking features but enough to make preorders sold out in just 1 hour, which is much faster than other iPhones. 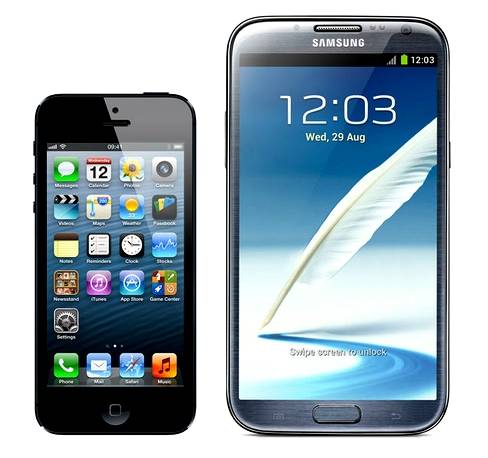 It will be tough for Samsung to beat the strong brand of Apple at the moment, however, the gap is getting closer each year and Samsung has some advantages with the Galaxy Note 2. Let’s break down and compare tech specs of the 2 smartphones, iPhone 5 and Galaxy Note 2.

The tech specs can’t tell all about their performance but the 2 phones are absolutely the best ones on the market at the end of 2012. If you are considering one of them, let us know your choice.