It’s a Samsung way of effort that bringing up the product of Galaxy Note II. It is basically designed with an objective to meet the needs of niche segment, which are looking for a hybrid of smart phone and a tablet. Although they are couple of mobile brands that tried this way but couldn’t show a considerable impact on the market, due to various reasons, but this time it is the Samsung style of efforts that created much expectations on the product.

After a lose at the court against the rival Apple Inc, the product’s performance at the market could show a major impact on the credibility and reputation of the company. Even though the company has got very strong fundamentals, its take on innovation and utilizing the technology could be communicated to the product only with the products like Note II.

The phoneblet appears to be designed to gain applause of innovative design from the customers. It couldn’t address the challenge of carrying a phoneblet as the customers look at it for carrying as easy as a phone but utilize it as flexible as a tablet. It proved to be an awesome with its looks that were catchy right from the first launch. Most latest Android 4.1 Jelly Bean OS where much suited to its Exynos chipset and most reliable quad-core processor. The most important display aspect is provided with a descent 5.5 inches screen and the 1280×720 pixel resolution. It is designed to look thinner than many other tablets with 9.4 mm and weighs 180 grams. The product is designed to support latest networks like 4G and flexible enough to even connect to the 2G networks. 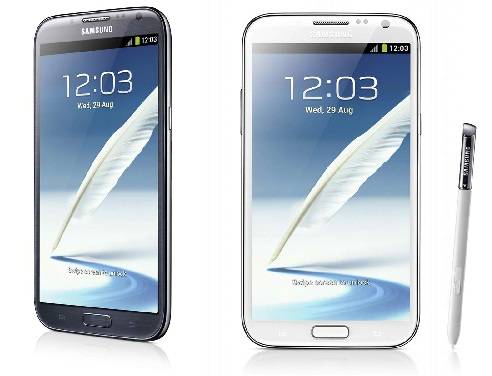 The device uses a 3100mAh battery, which Samsung has upgraded from 2500mAh that was used prior to this model. It is said that company also designed the product with some features added to save the battery. But it is a wait and sees case that how far the up gradation could show effect on the battery life.

The Galaxy Note II’s camera is an 8 megapixel still camera with a resolution of 3264×2448 and auto-focus. The camera carries the features like Geo-tagging, backlit sensor, face detection as well as smile detection, touch focus and image stabilization.

The design supports the video camera with Full HD (1080p) video recording at 30fps, LED flash. It has also got provision for a secondary camera with 1.9MP that faces front especially to experience the video calling facility.

The Note II’s better way of designing is the interesting aspect to wait and see how far it would perform better at market like better battery, better screen, better look and better OS etc, but most interesting feature that may stand as a pro factor for the product would be its stylus. It is very much promoted hover functionality of the s-pen is one aspect that could make a difference in utilisation of the product.

It could be the size that may matter a lot for the product, if they product couldn’t serve to be a hybrid of phone and tablet, it could be a major disadvantage for the users. With respect to the company’s recent lose in the court over the Apple, the Apple asked the court to include few more products under infringement list, which includes the Note as well. If the court accepts and takes action the sales of the product may face a halt in US market.

At the latest Berlin fair the Galaxy Note II is listed to come with an off-contract price tag of Euro 639.90. The devices are scheduled to ship from the month of October in most of the countries worldwide.

The mobile’s appealing looks and assuring features stand as points to be considered in testing the device. One feature that would definitely consider minding the product would be its stylus s-pen. Apart from the upgraded features and a hybrid way of presentation the Note II can not excite you or thrill you with most unexpected. It could be one of the best give a try products in recent times, as it assures you better features in all sense.