Samsung announced the Galaxy Mini 2 at the Mobile World Congress held in Barcelona, Spain. The Galaxy Mini 2 is an evolutionary product and follows its predecessor Galaxy Mini. As per an entry level phone it has decent features. The product has been designed to meet the range of the lower end price in the market. It may easily be one of the most suited Smartphones at its available price range. The product will be made available soon in the international market. As such no official date of release has been made, but they plan to launch the product in April, 2012.

Samsung has stuck with a plain and simple design. They have not made much effort to boost it. The design is similar to that of the Samsung Galaxy with a comparable hump on the rear of the device. The rear also has a fine texture which helps you to grip the phone. The corners are smoothed and rounded with shiny chrome like material on its outer rim. This borders the shape of the phone. Although the design is simple, it is compact and aesthetic. The device weighs around 105g. The dimensions of the phone are 109.4 x 58.6 x 11.9 mm. Holding the device is not an issue at all. It is perfect in terms of a Smartphone size. It fits right in your palm and operating it isn’t difficult at all. You can easily operate it with your thumb. 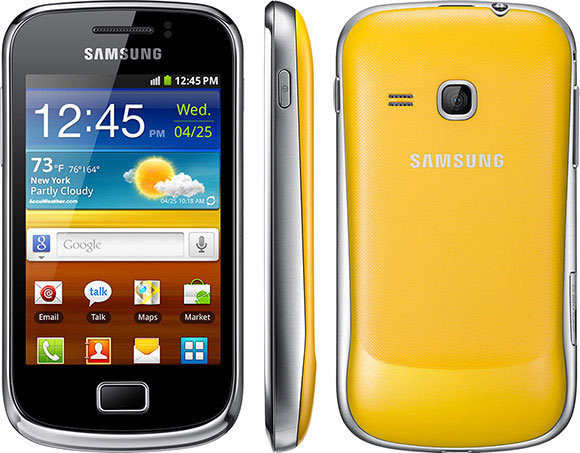 In comparison to its predecessor, the screen size of the Galaxy Mini 2 has been boosted from 3.14 inches to 3.27 inches. It is supported by HVGA screen technology. It has the TFT capacitive touch screen functionality. The display resolution is 320×480 pixels with 16M colors. The density of the color on screen is 176 ppi. It also supports multi-touch. Now these features may not sound something extraordinary. But they are just right for a low end Smartphone. The display is bright and can be used under daylight as well.

The Smartphone has an internal capacity of 4GB. It runs on a 512 MB internal RAM. It also supports a memory card slot. It can accommodate a Micro SD card up to 32GB.

It is complemented with the Touch Wiz user interface. It consists of similar applications which you would find on an Android Smartphone running on Gingerbread. Apart from that the onscreen virtual keyboard may be a cause of discomfort for users. It is very small and accessing it with just the fingers is not an easy job. This discomfort is limited to the portrait mode. In the landscape mode however there is no such hassle. The connectivity is well supported by Bluetooth, Wi-Fi or 3G. It supports flash content and various other browsing features.

The Samsung Galaxy Mini 2 runs on an 800 MHz single core processor. The chipset has been manufactured by Qualcomm and is known as the MSM7227a. This is an upgrade made from the previous version of the model where the phone consisted of a slow 600MHz CPU. Apart from the CPU it also consists of the GPU of Adreno.200.

The device is powered by the Android platform. However it is a bit outdated as it runs on Android 2.3.6 Gingerbread. Currently the Android Ice-Cream Sandwich 4.0 is ruling the market. Samsung could have implemented this feature. It is most likely that they have compromised on the updates solely to cut down on the cost of the device. The OS is well complemented by the processor which ensures a smooth running of various applications.

Again do not raise your hopes. This is an entry level Smartphone manufactured for lower price ranges. It has a rear end camera of 3.3 Mega Pixels. It lacks auto focusing and LED flash. A very basic feature for video calling is included in the form of a VGA camera at the front end. As mentioned the Smartphone offers the simplest of the functions. You can carry out video recording as well. Digital Zooming and Geo Tagging can also be accessed.

It comprises of the standard Lithium Ion battery with a rating of 1300mAh. The battery life is still to be tested. The review is based on a crude product. However the battery rating is pretty powerful.

Samsung has not announced the price of its Galaxy Mini 2 product. It has been designed to meet the affordable range in the market. However no specific price point has been mentioned yet.

Keeping in mind that this is an entry level Smartphone, the Galaxy Mini 2 has fared relatively well. You must also keep in mind that as compared to its affordable price range, this Smartphone is worth your money. It is suitable for those who are not too keen to invest on expensive Smartphones and would rather like to experience it first before making a big buy. The quality of the product is sold on its brand name: Samsung. It has all the basic features required in a Smartphone.