Samsung Galaxy Appeal is a touch and type mobile phone which is loaded with features you are surely going to love. From the vertically slide opening to the QWERTY keyboard, this handset is surely great when it comes to looks and style. Here is all that you should know about this new model by Samsung. From performance to the features, the following information will help you decide whether Samsung Galaxy Appeal is the phone for you.

This vertically slide phone has an oval shaped body and comes in a black casing. It is a touch and type phone. It is 112 mm in length and 57.7 mm in breadth. Samsung Galaxy appeal is 14.2 mm thick. The phone is sober and appealing and has a 3.2 inch display as well as a slider QWERTY keyboard with touch sensitive controls.

Samsung Galaxy Appeal runs on Android 2.3 Gingerbread and has Samsung’s TouchWiz interface as well. This 3G data mobile phone also offers GPS, Wi-Fi as well as Bluetooth support. Like other Android devices, Google services and Social networking sites tie into this handset as well. Hence you can integrate Linked In, Twitter, Facebook, Google accounts as well as Microsoft Exchange. You will get all the apps you possible use such as Gmail, Google maps and navigation, Google place, YouTube as well as the play store. Among other things, the phone offers music player. calculator, calendar, clock and other essentials. Next we come to Samsung applications such as AllShare which is for DLNA sharing and Kies Air which is for Wi-fi content sharing. Among other applications we have the branded applications of AT &T like AT&T navigator, U-Verse mobile television, Social networking and online music store as well. Samsung Galaxy Appeal has a 3.2 megapixel camera but no flash or autofocus is present. The camera comes with white balance settings, effects as well as shooting modes. The phone has almost all the features you generally expect a smart phone to have. 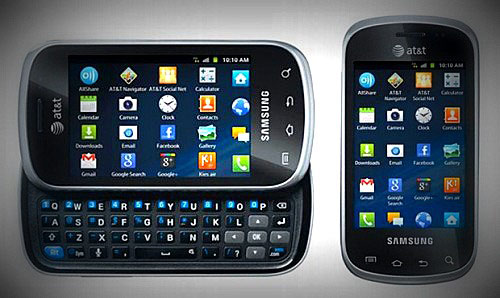 The call quality of the phone is not that great owing to the constant white noise present in the background. The audio sounded pretty good. Volume, when set at medium, sounds good. The Samsung Galaxy Appeal sports a 800MHz Qualcomm MSM7225A single core processor. Those of you who are expecting extremely fast internal speed, Samsung Galaxy appeal will not be satisfactory for you. this phone doesn’t have the fastest data speeds which is offered by the market.

The 3.2 MP camera is not all that good and lacks flash as well as autofocus. However it is the video quality of the device’s camera which is the real cause of worry. Video quality could have been much better than what it is. The videos recorded by the camera were rather dull when it comes to color and the audio part of the video was hardly recorded. The camera is one of the minus points of the phone.

The handset sports a 1.300 mAh battery which will give you a battery life of seven hours of talktime and about 12 days of standby time. The battery life of Samsung Galaxy Appeal can be called decent if not great.

The Samsung Galaxy Appeal is available to you at a decent price of $149.99 . Not a high price to pay for a handset which has so much to offer.

When it comes to the good points, Samsung Galaxy Appeal comes with the smartphone features of Android 2.3 gingerbread. The backing is a comfortable one. The phone is not too expensive. Among the bad points, we can count the small size of the screen and the camera which comes without a flash.

All in all, Samsung Galaxy Appeal undoubtedly comes with features you are going to love but there are a number of drawbacks as well. It offers quite a lot keeping in mind the pocket friendly price of the phone but some features could have been better. I would say Samsung has done an excellent job again. I would definitely give this phone 4 star and advice you to go for it.