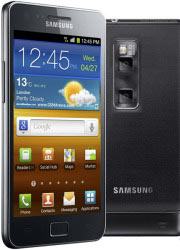 According to some news in Korea, Samsung will be joining the 3D competition with HTC and LG to produce its first glasses-free smartphone, Samsung Galaxy 3D. This will be a remarkable rival to other 3D smartphones like LG Optimus 3D and HTC EVO 3D.

The Samsung Galaxy 3D is expected to bring similar features as HTC and LG 3D phones, it also has two 8 megapixel camera at the back to capture 3D images and videos. Specifically, this would be the upgraded version of Samsung Galaxy S II which sports a 4.3-inch display and an HDMI port to convert your content to the big screen. Under the hood, Samsung Galaxy 3D will be powered by an improved 1.2GHz Exynos dual-core processor and we can expect it would run on the newest Android 4.0 Ice Cream Sandwich. Samsung’s TouchWiz UI will be pre-installed and it will possibly be revamped in 3D.

The Galaxy 3D is set to be released by Q4 this year and it would be an awesome Christmas present. We can definitely expect more 3D content which is missing on both the LG Optimus 3D and HTC EVO 3D.