Nook Simple touch is the successor of Nook simple e-reader, along with a revolutionary feature of GlowLight. It has after-dark reading capabilities, that is, the brightness of the screen increases when light in the background goes off. It’s pretty much a wonder because it enables you to read when the people around you want to sleep. It is definitely going to save some marriages which were breaking apart because of women’s overnight reading habits leaving the light ON when their spouses wished to sleep. The Nook simple touch with glowlight is expected to be released soon by Barnes and Nobles, the brains behind this product.

Let’s discuss the features of Nook Simple touch with glowlight in detail:

The new nook simple touch has pretty much the same features in terms of hardware as the model released by Barnes and Nobles last year. The most significant development in the model is undoubtedly the GlowLight. Well, the last model, named Nook simple touch gold, had an impressive design reflected in its squat shape and round corners. The device was wide enough, wider than other e-readers, such as the amazon kindle owing to the physical page turn buttons present at both sides of the Nook simple touch e-reader. Touch buttons are always trendier, but not oh-so- reliable. You need some physical buttons to press and go with it easily when the touch buttons hang and freeze. 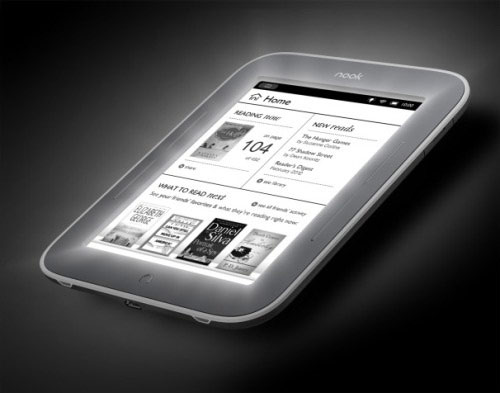 Nook simple e-reader with GlowLight has pretty much the same appearance as its predecessor, the Nook e-reader gold. It features the same dark matte grey color, with Nook logo above the screen. There is a light colored border on the face of this e-reader, which is probably the only distinction in case of looks from the previous model of Nook e-reader.

Nook simple e-reader has the same 800 MHz TI OMAP processor, as featured in most of the e-readers. Page turning speed remains same as its previous model, the Nook e-reader gold. Wi-fi also has same speed as the previous model, posing some problem for the readers who wish to download books on the go. 3G speed has not been tapped by Barnes and Nobles in their devices yet. Battery life has always been an issue of contention in the world of e-readers. However, it is claimed that the Nook simple e-reader runs over two months if it’s used for reading half an hour daily.

Well, now we discuss about the specialty of this all new innovation in the world of e-readers. The nook simple e-reader is no less than a blessing for all you avid readers out there who think that nothing should come between you and your favorite book. While reading with kindle fire, iPad, nook simple reader (without GlowLight) or any other e-reader for that matter, you need to have an external light source for optimized reading. It’s not that these devices don’t have backlight, but it’s just not sufficient for reading in complete dark. The illumination is not that uniformly spread across the screen in all those readers as in the patent pending GlowLight enabled Nook e-reader. You can access the GlowLight feature by pressing the “n” button right below the screen for about two seconds. You can see the light emanating from the top of the screen of your Nook e-reader. The light gets superbly distributed all across the screen allowing you to read at any hour of the night, without disturbing anybody else. The screen also has an anti-glare layer applied on it so that your reading experience remains the same when you are out in the sunlight.

The software is pretty much the same as the predecessor, Nook simple e-reader. You have the home page at the centre of the screen, showing how much you have progressed with the book. A list of new reads and recommended reads is maintained at the bottom. There’s a notification space at the top along with signals showing wi-fi strength, time and battery. The reading screen basically has text all over it, with a page number at the bottom and title of the book at the top.

On the whole, we describe the Nook simple e-reader with GlowLight as quite an innovation with its spectacular new GlowLight technology enabling travelers, insomniacs and other people to read without disturbing the people around them.