This week has been fraught no end with leaks about everything mobile, but one rumor that grabbed the radar of many is Nokia’s new smartphone sporting a vastly spruced up camera sensor that has been spotted in the wild. The Finnish phone maker looks to be up to something that will surely spur innovation in smartphone cameras, if the buzzes are to be believed.

According to reports, the Windows Phone-based device will show off a powerful 41-megapixel PureView camera along with its close proximity to the Nokia Lumia 920 in terms of design. Others have called it the Lumia 1000. Whatever it is, there are things that have yet to unfold to confirm the scant details to Nokia Lumia EOS. One tipster said Lumia EOS will sport a 4.5-inch AMOLED touch screen with 1280×768 res, covered by a polycarbonate plastic. That’s a dramatic leap from existing Lumia phones such as the 920, 925 and 928 that have only 8.7MP sensors onboard. 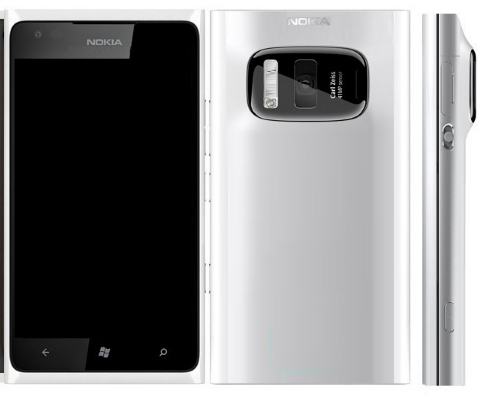 To somehow conceal the over-sized bulge created by the presence of a PureView camera and sensor, both ends of the device have been tapered. Compared to PureView 808, this one has been trimmed. Surely we saw the same system installed on Symbian devices before, but the 41MP technology for Lumia EOS is said to have taken a smaller form now. Alongside the camera lens is a Xenon flash in addition to a fresh app – Nokia Pro Camera – that overhauls the user interface of Nokia’s camera software. That was the same camera app Nokia built into the Lumia 925, which improved the shots enormously. The app is expected to come to other versions of the Lumia, including the EOS.

However, doubts linger as to whether the EOS would really come with a 41MP camera after its chassis was seen with a mark indicating an “XX Megapixels” sensor. A fresh update to this leak is that the device would not come in varied colors. There would also be no wireless charging support for Lumia EOS, though it would allegedly get the NL 925 wireless charging covers.

Recently, Jo Harlow from Nokia hinted at the coming of another handset from the company this summer, but provided no further details about what it would look like or even the specs.We do not know as of this moment about the launch date and pricing if ever the Nokia Lumia EOS comes out. Based on Harlow’s statement, the date could be safely pegged for July.