The Apple iPhone 6 has been the cause of much hoopla over the course of previous 2-3 months. We have seen countless iPhone 6 based leaks, but most of them were centered around the 4.7-inch model, while the phablet 5.5-inch version has impressively eluded the rumor mill. With that said, some pictures of the iPhone 6’s outer casing have popped. And BTW, it’s the 4.7-inch model.

One of Apple’s main emphasis with the iPhone is its ergonomics and easier handling. While most of the smartphone realm has moved away to bigger phone sizes, hell, even phablets have emerged and been quite a hit. Apple has mostly stuck with smaller display size. Apple’s late CEO Steve Jobs was reluctant to couple a bigger screen on the iPhone due to his belief that a smartphone should be portable and easier to use single-handedly. Apple stuck the so-called ideal 3.5-inch screen size for a long time, and recently shifting to a slightly larger 4-inch screen. Although large screens provide a decent amount of real estate for viewing videos, playing games and performing other similar tasks, Apple’s beef with large display sizes continued, until now. 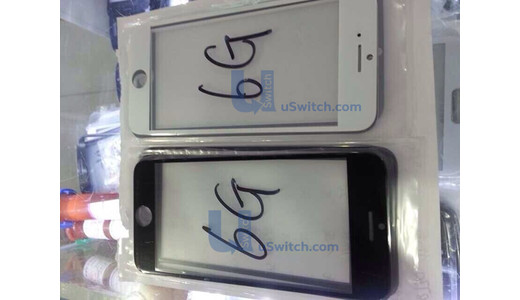 Although, Apple’s move to a larger and welcoming 4.7-inch display size has delighted many, there is still the one-handed use philosophy Apple has to pay heed to. Indeed, Apple has paid attention to that. On closer examination, we can spot considerably reduced bezel size, and notably less unused space around the Home button. This means Apple can fit in a larger display and achieve the quoted screen sizes without pushing the device into two-handed territory. These minor changes are much akin to the design philosophy that went behind the Motorola Moto X, which coincidently boasts an identically sized display in a smaller form factor. The cases are also marked with ‘6G’, further attesting to the fact that these are indeed the real deal.

In addition to larger display, Apple will also pack the upcoming iPhone with beefy specs and such. Sapphire glass coating will also make its way to the phone, and other such upgrades.