There has been news of an image leak of the upcoming mobile by Motorola, Motorola X.  The image was seen at a site showing a Motorola device which has the possibility of bearing the Motorola X name.

Motorola X has been rumored to be the next flagship device from Google under the Motorola brand after Google acquired it. Plenty of rumors already filled up on the internet all pointing towards the possibility of the new Motorola X and the latest rumor adds further weight to it.

As people get intrigued by the name, the image was sent to a site, according to the sources and the image shows Motorola XT1056 while in testing for Sprint USA’s 4G LTE network. On top of the device it’s written “Note For Sale” means it’s more of a prototype/testing device handed to one of the QA people to test the working of the device. 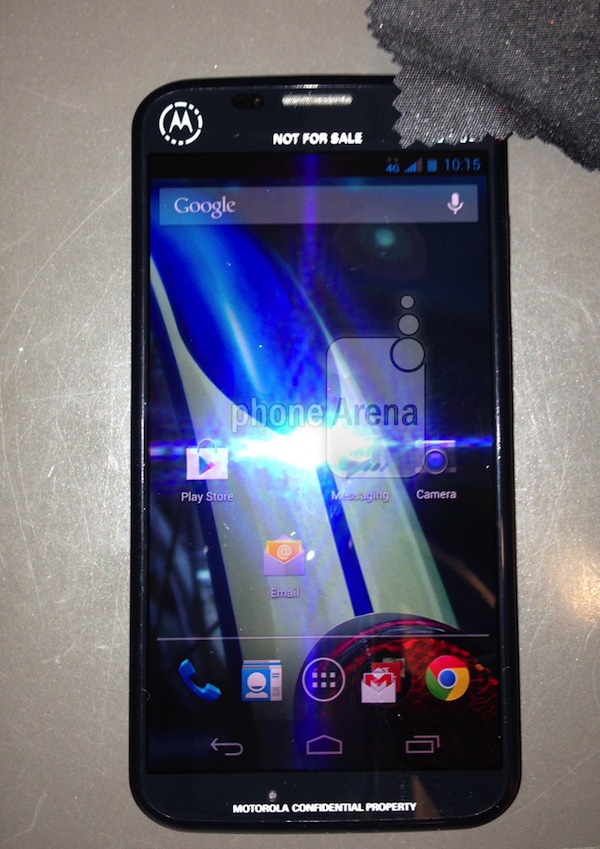 The device is said to have either a 4.5” or 4.6” display but nothing is sure about it. We might see a proper 4.7 inch device just like the Nexus devices.

We have already heard that Motorola X phone will be supporting a 720p display with OLED screen on the front. The device will be powered by a quad core 1.7 GHz Snapdragon CPU or a 1.9 GHz and will have 2 GB of RAM along with 16 GB of inbuilt storage. No indication about an external microSD card slot or any upper limit for the storage. The battery is also said to be removable which is very good considering many phones don’t have removable battery these days.

The device as seen on the image shows that it is being run on Android Jelly Bean most probably 4.2.2.  But since it’s a Google Motorola X after all, we might see Android 4.2.3 Jelly Bean on it. The most amazing thing is the slimness of the screen. The Motorola X looks more like a Nexus device from Google but we still have to see what Google has to offer with this new device. We still haven’t heard anything official from Google and there are no details about the announcement date and pricing.