Samsung might be on course to announce their new galaxy tab 3 plus after recent image leaks shows the supposed galaxy tab 3, codenamed GT-P8200.

We can say that the images do have some form of assurance that it s the new galaxy tab 3 because from the pictures, it resembles a lot to the Galaxy note 8.0. The lockscreen wallpaper shown in the image is exactly the same as was in the Galaxy S4. There are also rumors that Samsung might rename the entire Galaxy Tab line of products, because hints are there that this new galaxy Tab 3 might be called Galaxy S tab when it will be launched. But since it is a big thing to totally change the naming convention of the products since it might produce disarray in products and customers.

Specs of the Galaxy Tab 3

According to the latest leak, the device will bring a full 10 inch tab display with a big resolution of 2560 x 1600 with 300ppi pixel density. The screen material is rumored to be either Super AMOLED or a PLS LCD Panel. 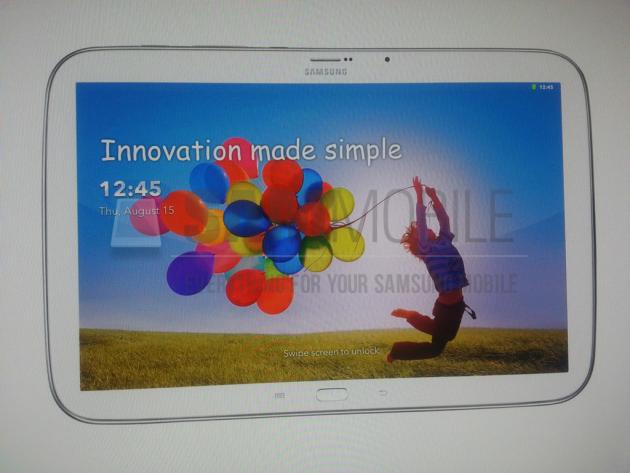 In the camera department, the device might have a 8MP camera at the back capable of shooting a 1080p video @30fps and a 2MP front facing camera. The device will be available in two variants – 32GB and 64GB with expandable storage using the microSD card.

The battery to be used in the device is said to be an IR blaster and a 9000mAh battery unit.

Put aside other things, but changing the naming convention is a bit of an extra ordinary thing that is least possible in such circumstances where Samsung launches a great deal of devices each year. But the story behind this is that Samsung is trying to use the same marketing strategy as they used with their flagship bran the Samsung Galaxy and that requires a name change.

Do you think that Samsung should change the name or should they really have to take such initiative? Leave us comments down below to share your views with us.