The new DROID RAZR smartphone has been announced at the press conference of Motorola and Verizon Wireless in New York City today. Motorola has invested much time for the design of DROID RAZR and it is really worth our expectations. The handset looks so premium with its beautiful finishes and materials. It is now the world’s thinnest smartphone and described to be impossibly thin at just 7.1mm.

Moreover, it is made with laser-cut KEVLAR fiber on the outside, Corning Gorilla Glass for scratch resistance, stainless steel core, laminated glass and water repellent nano-coating to protect the phone. I really think DROID RAZR will have no competition in terms of design, even the new Samsung Galaxy Nexus or iPhone 4S. 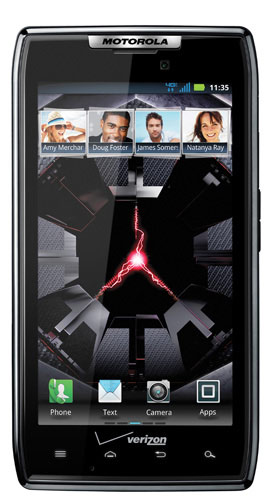 If you’ve already fallen in love with the awesome look of DROID RAZR, I believe you will be satisfied more after checking its tech specs:

Verizon Wireless has confirmed that the DROID RAZR orders will begin on October 27th and be available in early November for $299.99 with two-year contract. With what has been revealed, this is really promised to be thinner, stronger, faster and smarter than most of smartphones out there. Do you agree?