According to the @evleaves, the new upcoming device Motorola X will be available in at least four new wood grained backs. It will also drop its price to a $99 on contract come Q4 2013. This begins at the end of the September and as the news say, it will offer up to a minimum or four new wooden grained backs to choose from.

Previously, the price of the Moto X has been often questioned because high performing devices are not this expensive like Samsung Galaxy S4 and the HTC One and the Moto X with the price tag of $200. The images showed that the wooden panels will be announced and available around the same time it was announced. The drop of the price may definitely seem a bit troubling to some but everyone has always felt that the price of Moto X should have been less and it is not realistic that the purchasers will pay $200 to get the device with the same processing and high performing devices such as S4 and HTC One. 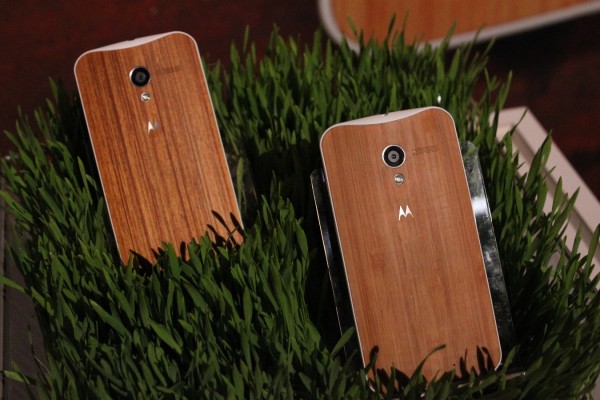 The four new wooden grained backs range from light wood shades to dark shades. The new wooden back is a new feature and looks elegant yet simple in images that were leaked. The one problem is that the device with the wooden back will cost an extra of $50. However the overall cost of the device Moto X is still less than it is right now. According to news and opinions of many users, it might be a good idea to wait until the price of Moto X drops and is available at cheaper rates.

As mentioned above, the Moto X looks very elegant and nice from the images and it makes sense and proves that Motorola will go the extra mile with this device and achieve something new for their users and to attract the market. But the question that is now raised is that is a $100 Moto X a more compelling device? Leave us comments down below and share your views with us. Will you be fascinated with the $100 cut in price or would you rather go for another device.