Finally we’ve got something official from Apple and all the rumors and speculations of iPhone 5 could be stopped now. Last week, we heard about the Apple Fall Event on October 4 and still suspect the authenticity of the news. The iPhone event will start at 10 a.m. Pacific time at Apple’s headquarter in Cupertino, California and absolutely will be led by Apple’s new CEO Tim Cook.

We can confirm the news as Apple sent out invitations read “Let’s Talk iPhone” to members of tech presses yesterday. In the Apple’s invitation graphics, they use 4 iOS app icons, namely Calendar, Clock, Maps, and Phone with the quote “Let’s talk iPhone” underneath. This is quite a clever use as the calendar icon points out that the event will happen on October 4, clock shows 10:00, map points to the Cupertino campus, and the phone marks 1 phone call. I am a bit curious with what the number 1 means, does it mean only the next generation of iPhone will be announced and there will be no iPad or iPod Touch? Or it has something related to the appearance of Steve Jobs? Another possibility is the iOS 5 voice control allowing users to speak in English and iPhone will respond with appropriate actions. It is difficult to guess at the moment. 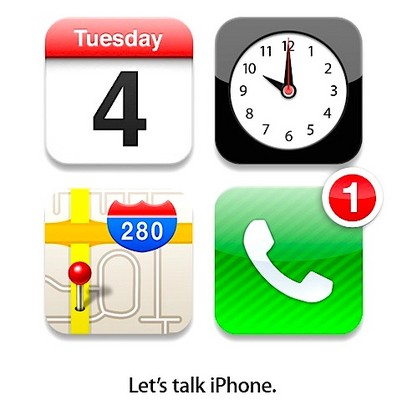 Apple fans are still left with many wonders as the invitation suggest few clues what will be presented in the event, if Apple will launch a completely redesigned iPhone 5 or just a revamped iPhone 4. However, there is one thing for sure that the iOS 5 will get official. Some analysts even guessed that this will be the event of iOS 5, and the new generation of iPhone will be the iPhone 4S which is very similar to current iPhone 4, armed with new features of iOS 5 and sold for much lower price.

Besides, the iPhone 5/4S will be available very soon, just one week after its announcement. Specifically, it will go on sale initially in the US, UK, Germany, France and Japan from Friday, October 14.