This is because the Metro UI received a mixed reaction from end users. While some liked it’s sleek and stylish look, others have complained that it is merely an obstruction, which deprives the end user from simplicity of usage. In fact, many users who installed Windows 8, found it hard to locate the shut down button. To make life easier for users who simply cannot stand the Metro UI and the ones who would like to temporarily disable it, there are many free tools that have been developed by third-party developers. In this post we will provide you with an overview of these tools, so that you can make your Windows 8 experience more convenient by tweaking with the Metro UI functionality. 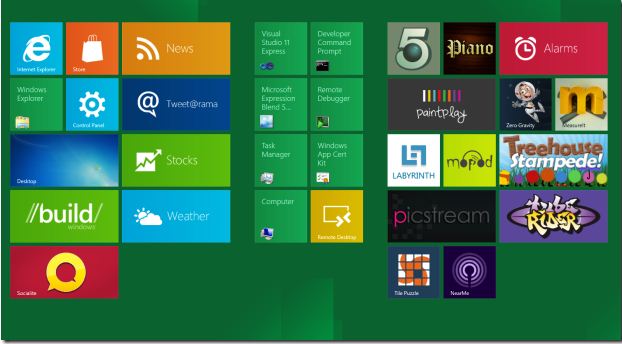 This was one of the first Windows 8 tools to be released on deviantART by a third-party developer. This simple tools provides a very basic feature of toggling between the Metro Start screen and the Classic start menu in Windows 8. All you have to do is to launch the portable EXE file and use the button on the main interface of this application to switch between the Metro and Windows 7 Classic Start Menu.

Additional Requirements: Windows 8 may require you to download and install .Net 3.5.1 run-times. 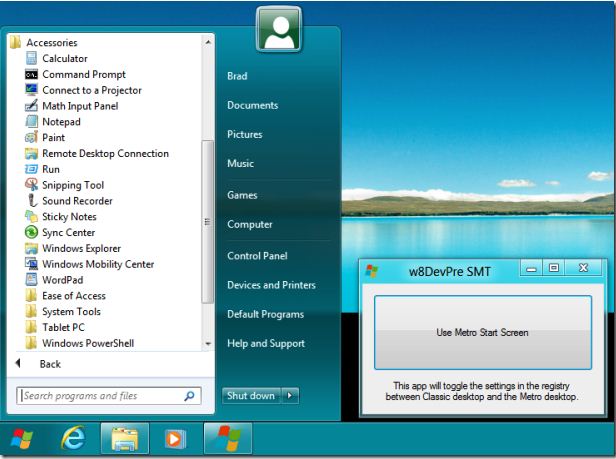 If you are looking for a more advanced application for switching between the Metro UI and the Windows 7 classic start menu, then you might find Metro Controller to be of more utility. It is a portable software to partially or completely disabling the Metro UI. It allows disabling either the complete Metro user Interface or only the partial features of Metro UI. After being launched, it provides you with three options. The first option allows disabling all Metro features including the Ribbon Explorer, Lock Screen and Metro start menu. Whereas, the second option allows keeping the Ribbon Explorer, while disabling all other Metro features. If you would like to completely disable all Metro features, then use the third option. You can enable the Metro features anytime, by running the portable EXE file and selecting the “Enable Only Metro features” option. 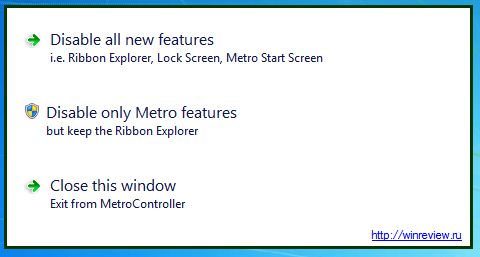 If you find the above applications to be insufficient in terms of providing proper Metro UI tweaking options, then you definitely need the Metro UI Tweaker. It is perhaps one of the most advanced tweaks that are currently available for enabling and disabling the Metro features in Window 8. Metro UI Tweaker allows you to perform the following tasks: 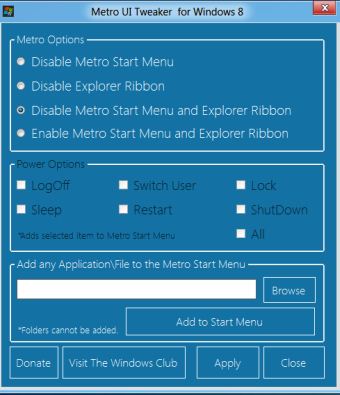 We hope that the above mentioned tweaks will helps you customize your Windows 8 operating system to help you control the Metro UI according to your liking. Feel free to drop us a line regarding any queries or suggestions. Happy Tweaking!