With faster connection speeds and more evolved technology, many of us already access TV shows online. According to recent data by eMarketer, 50% of Americans will choose to watch digital TV through their tablet, laptop or internet TV devices by 2014.

However, as US audiences are just starting to make the transition to online broadcasts, countries in Asia are already choosing them as their primary TV platforms. There are over 4 million online TV channels in South Korea, with only half of the country’s residents watching shows on their traditional TV sets.

With such a vast online TV market, individuals can establish their very own independent channels as a means of broadcasting their own content and earning money. There aren’t many requirements to becoming a success via online TV either.

One of Korea’s biggest online TV stars, Biryong films himself cooking and eating meals on his own, with self-broadcasters such as himself earning up to $10,000 a month from viewer donations.

Self-broadcasting isn’t exclusive to Asia though. Social video sites such as Youtube and Vine already allow online users to upload and publish their own clips and shows. Although these are a good place for creative video makers to start, they do not offer the same capabilities and features that companies such as Veoh do.

Veoh offers free membership with no uploading limits. Users are able to create their own profiles where they can publish their own movies and personalize their online appearance. Pro accounts offer further benefits, with the ability to schedule movies to go live on certain dates.

Websites such as this allow independent filmmakers to create a channel where they can allow viewers to preview, download and burn their products and even charge a rental fee.

Veoh can syndicate video to personal Youtube, Myspace and Google accounts and make videos available from iPods and TV players, allowing viewers to be in complete control of what they watch.

The website has received praise from Time Warner and Dick Eisner of Disney. High profile clients include Billboard, TV Guide and The Ford Modelling Agency.

It’s not unusual for global companies to take advantage of sophisticated online TV. Increasing amounts of network channels are launching catch-up apps to personalize the coverage they watch. 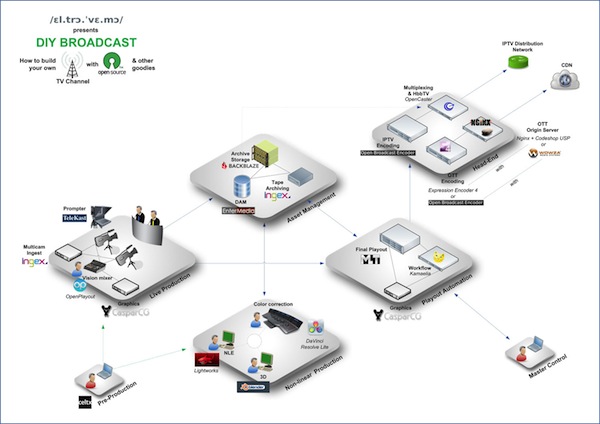 Whilst organizations such as these will be dipping into their pockets to deliver high-end online channels, individual broadcasters do not have to pay a fortune to create their own channel.

Other than the initial set up costs, the equipment and software is affordable, and with free membership on sites such as Veoh you don’t have to fork out a fortune.

The biggest expense will be the camera equipment and IT hardware to run the software on. If you already have access to filming equipment and a computer then the other requirements are relatively inexpensive.

A lot of open source production and video editing software offer free trials and discounts or can be found for free. After this, all you will need is some inexpensive SDI cards, minimalistic audio and video routing cables as well as your time and development skills. The rest is then up to you.

Whilst it is unlikely that you will pull in as much as online TV stars in South Korea earn, creating and running your own TV channel can be extremely rewarding. Not only does it allow you a platform to access a wider audience, but it also shows a passion and dedication for your trade, which can be vital to helping you stand out from the crowds.