If you’re still not convinced that the iPhone 5c isn’t doing as good as the iPhone 5s is, you better looks at the rumors arising against Foxconn. According to the rumor, Foxconn has halted the production of the iPhone 5c in order to concentrate all their efforts on the more famous iPhone 5s. 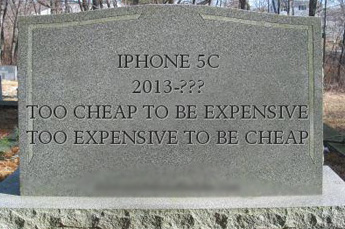 Zhengzhou employees over 120,000 workers and now they all will be working on the new iPhone 5s. over all iPhone 5s gives better advantage over its cheap brother the iPhone 5c mainly because of its premium looks and extra features that includes a better camera, a titan flagship smartphone that is powered by a 64 bit A7 processor and a scanner that was something new that was introduced into the market that attracted a lot of Apple fans right away. Other than that its aluminum body construction that the cheap iPhone 5c wasn’t able to deliver mainly because of its plastic body construction. Yes, there is a lot of difference between the two smartphones, the iPhone 5s and the iPhone 5c, but when it comes to the price both of them have a different impact on your wallet.

We think that the main reason for the failure of iPhone 5c was that people were expecting something new because almost all the Apple fans already owned the iPhone 5 that was released last year and with the prices of iPhone 5c and the iPhone 5 almost similar to each other there was no point in upgrading to the iPhone 5c, because both of the phones had similar specs. Customers preferred the sleek look of the old iPhone 5 over the iPhone 5c.