There have been a lot of rumors about the upcoming operating system on the Windows phone, the Windows Phone 8.1 and it’s said that it is going to be one of the biggest update that Windows phone is going to receive this year. We finally got our hands on a screen shot of a notification menu on the Windows Phone 8.1 which is a new addition to the OS. The picture is blurred but the sources that the picture came from is pretty legit. 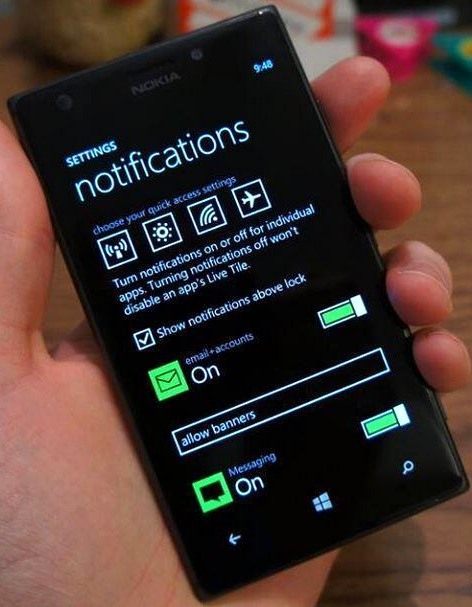 Windows OS overall is pretty good and the only thing seems to be missing from the OS was the notification center as it makes things easier to get to. Windows Phone 8.1 is also supposed to have a voice assistant same like Siri from iOS named ‘Cortana’. Notification centers are a must have nowadays on smartphone and after Apple its Windows time to add some customization to their OS. There would probably be more features yet to come to the new OS among which are also the three layer tile setting on the Windows Phone 8.1.

It’s finally nice to see Windows platform evolving a lot and in a single year it has changed a lot whereas Nokia chose to update both the hardware and software on their smartphones as it’s the only competitor out there for Windows at the moment and is really trying hard to boost their sales by renewing everything and through advertisement as well as they just showed that Nokia phones can also be used with gloves on in Winters and it’s something only Nokia screens have for now.